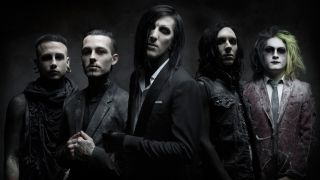 Although much is said of the jinx that often plagues a band’s second album, in fact it’s nearly always a band’s third album that heralds ‘make-or-break’ status. Approaching the songwriting for Reincarnate, Chris knew that the album would either become a career-defining statement or chart a course into irrelevance. Again, they threw out the rulebook. “We dropped all sense of mission and we were just like, ‘We’re going to write a record that we fucking like, and we’re going to have fun with it.’”

Lyrically, Chris prefers writing songs through the eyes of characters from movies and literature, as on the song Abigail, a single from their 2010 debut, that he wrote about the Salem witch trials from the perspective of the John Proctor character in The Crucible. On Infamous there were no such storylines, his fantasy world replaced with his own personal views and experiences. The new record features both styles and Chris believes fans will appreciate the balance. “I think a lot of fans were bummed that I didn’t take on the storyline role [on Infamous]. For the new one, I did a mix of both.”

As evidence of the loose attitudes that informed the new record, witness Dead As Fuck, a snarling horror rock epic about a gravedigger who also happens to be a necrophiliac. “It was supposed to be just a straight-up, funny song, which was new for us because we had never done a song before that was solely meant to be funny.” A more obvious literary influence appears in the song Dark Passenger, which Chris wrote from the perspective of everybody’s favourite killer of serial killers, Dexter: “We are huge fans of the show and I really wanted to do a song through his eyes.”

In a ballsy gamble, Chris also converted his incendiary blog into a bare-knuckled belter called Everybody Sells Cocaine, which he advises “is basically that blog in song form. I figured that if I felt so strongly about it, I should write a song about it instead of just blog about it.”

One thing the band are not changing is their look, a macabre homage to the worlds of horror movies and goth rock, in the tradition of Alice Cooper and Marilyn Manson. Any band that spends that much time in front of a mirror will attract a fair amount of derision from inside and outside of metal, and Motionless In White are no exception. Chris remains nonplussed by such attentions, saying, “I have close, personal friends on the hardcore scene who tell me, ‘You do realise that if you dropped the makeup, hardcore kids would take you more seriously.’ They’re just giving honest and constructive criticism and I respect that, but in some way I don’t care. If the fucking hardcore kids won’t take us seriously, then whatever, I don’t care.”

Reincarnate is out now via Fearless.

This interview is an excerpt from our full interview with Chris, available in Metal Hammer issue 261. And you can head over here to read our dissection of Chris Motionless’s brain.