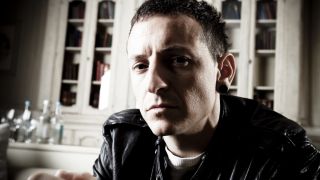 In our regular feature Thinking Out Loud, we find out what’s going on in the minds of the great and good. This week, we have a mooch around the brain of Linkin Park frontman Chester Bennington.

“The idea that success equals happiness pisses me off. It’s funny to think that just because you’re successful you’re now immune to the full range of the human experience. But we also realise that we’re not kids any more, we’re not youngsters with this teen angst and this feeling of ‘why does the world piss me off?’ and finding a way to express it. We have had a lot of success and there are a lot of great things going on for us, but there are things that really matter to us. When we talk about lyrical content we can’t just go back to being that angry kid, we need to talk about something that makes sense to who we are today. One of the themes that works really well and stretches into different areas is ‘What’s worth fighting for?’ – you can come up with a lot of different answers. Human rights, freedom, your creativity, your identity, finding your voice, being oppressed – all these things happen around the world on a constant basis that we find people struggling with, and we often struggle with as well. Those things do fill us with a lot of anger and we want to make a change in the world and to get involved.”

“I was on 11 hits of acid a day. I dropped so much acid I’m surprised I can still speak! I’d smoke a bunch of crack, do a bit of meth and just sit there and freak out. Then I’d smoke opium to come down. I weighed 110 pounds. My mom said I looked like I stepped out of Auschwitz. So I used pot to get off drugs. Every time I’d get a craving, I’d smoke my pot.”

“In 2006, I had a choice between stopping drinking or dying. I did some counselling with the guys and they really opened up and told me how they felt. I had no idea that I had been such a nightmare. I knew that I had a drinking problem, a drug problem and that parts of my personal life were crazy but I didn’t realise how much that was affecting the people around me until I got a good dose of ‘Here’s-what-you’re-really-like’. It was a shock. They said that I was two people – Chester and then that fucking guy. I didn’t want to be that guy.”

“My tattoos all symbolise something. The flames on my arm represent the Aries part of my fire sign. My left shoulder has a Piscean symbol and a Japanese Koi carp on my right. I have the album design on my left calf muscle. My back piece is six arms spread out and was done by my friend, who said it was a visual representation of how I reach out and grab the audience. I thought that was nice.”

“My dad – who is a retired police officer – loves Linkin Park and has always been supportive of me. I think he loves it a little more than I do, actually. The reason why he’s always supported me is because this is what I’ve always wanted to do. I’ve never backed down and I think he respects that. We’re not a cliched rock band where everyone is messed up on drugs. We’re all decent people, so that makes me proud too.”

“What is difficult is making a record you think other people want. We make music that we want to hear then we cross our fingers and hope everyone else likes it too. Obviously being a musician you want to make music that connects with people, you want people to want to listen to it – that’s the goal. I don’t know any artists that make music and don’t want people to hear their music. The focus has never been on what other people think of us, it’s more about what’s going to satisfy us and what’s going to get us excited about making a record. What’s exciting is making hard, heavy music that’s fun to play. And to challenge ourselves technically. We put the challenge out to Brad Delson that ‘would his 14-year-old self look at him as a guitar player and think he’s awesome?’ I don’t think so, considering Mike has been playing guitar on the past few records. So we challenged him to go in there and have fun and show the world what a good guitar player is. And we pushed every member of the band the same way.”

“Being in a band like Linkin Park comes with a lot of benefits because we get to see the world and meet people. Even though we have sold millions of records we are literally a bunch of guys who have a cool job. I don’t think I’m any different to who I was when I joined the band other than I’m older and have more experience. I appreciate that people know me for my music and that’s why they like what I do. They don’t know what I do outside of music and that’s intentional. I like going to the grocery store, I like going out in public and hanging out being another dad at the baseball game, and that’s something we cherish – the attention you want to get is the attention you do get.”