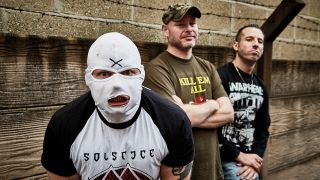 “I’ll tell you why I’m doing this. I wrote almost 90% of all the fucking Iron Monkey songs anyway. Those fucking songs are mine. Half the lyrics are mine. I’m essentially the core of that band so what I choose to do with Iron Monkey is up to me and it’s got fuck-all to do with anyone else. If I want to shove this band up my arse, I fucking will. I’m being serious. There’s definitely a lot of ‘fuck you’ involved in it.”

Formed in Nottingham in 1994, Iron Monkey were initially hailed as the UK’s robust response to the sludge metal sound propagated by Eyehategod and Grief. It soon became apparent that they were much more than that, and the next five years saw the band propelled breathlessly forward, thanks to the sheer monstrous power of their two albums and an unwavering reputation as a ferocious and authentically unnerving live act. The sight of vocalist Johnny Morrow lumbering menacingly around the stage, bottle of cooking sherry in hand, vomiting out grotesque, surreal diatribes over some of the biggest riffs ever penned will linger long in the memory of anyone who saw the band first time round. Iron Monkey split in 1999, reportedly amid acrimonious disputes with their record label Earache and after a terminal breakdown in communication between the band’s five members.

Everyone involved has gone on to make music with other bands and under various guises, but the tragic death of Johnny Morrow in 2002 seemed like a definitive full stop at the end of the band’s story. As a result, the recent news that founder member and guitarist Jim Rushby had resurrected Iron Monkey with a new lineup caused the internet – or at least those parts of it sensibly concerned with heavy music – to explode. Not surprisingly, opinion seems divided between those celebrating the news and those keen to dismiss the idea as some cynical money-grab. Pleasingly, Jim really couldn’t give a shit.

“All the original crew and the original bands from first time round, they’re all behind us,” he states. “We’ve got a load of new people who are behind us, too. There’s just a bunch of people talking shit. Fucking posers. We’ve got haters, which I like! It’s a buzz. We’ve always had desire to annoy people. That’s part of the ethos and the aesthetic of the band. There was no huge fucking plan. I was just messing around with riffs, it turned into this, let’s go and piss some people off and that’s it.”

Of course, Jim fully expects to hear people moaning that the new version of Iron Monkey isn’t the same without Johnny’s psychotic shrieks and, not unreasonably, has no apologies to make for that either.

“Johnny was my closest friend, so as far as the singing goes, no one else would be appropriate except me,” he says. “I didn’t want to do it, but it had to be me. So we’ve got two original members in the band [bassist Steve Watson was also in the first Iron Monkey line-up]. Scott [Briggs, drums] was in a band with Johnny anyway, and we’re all drinking buddies. Scott’s not some new fucking kid on the block, he’s part of our crew from back in the day.”

Anyone expecting the return of Iron Monkey to conjure some cosy facsimiles of past glories should be pleasantly horrified by 9-13. While Jim’s riffs are instantly recognisable, the album has a much harder, faster and nastier than vibe than most of the band’s best known material, and while Jim himself makes no claims to being the vocal equal of his predecessor and best friend, his incensed roar is undeniably convincing. Those who remember the very last days of Iron Monkey may also note that they were heading in this direction, before fate cut them off at the knees.

“Before we split up I’d started writing about four or five songs for a new album that were a in the vein of what we’re doing now,” Jim notes. “It’s a little bit more up-tempo, a little bit more of the hardcore punk coming out. I suppose it’s like picking up where we left off 19 years ago. The thing is, a lot of people want us to do something that sounds exactly like Iron Monkey circa Our Problem, but if you look at what we did, each album evolves. If you want a reference point for what we’re doing now, listen to the stuff on the live CD [2003’s Ruined By Idiots] and those songs Dukes Of Nothing and Charlton Heston’s Floor. This new stuff is in that vein.”

As he is eager to assert, Jim never had any particular desire to bring Iron Monkey back to life. He was “fucking around with a guitar” one day and suddenly some riffs came out that sounded similar enough to his former band that it sparked the idea to give the whole thing another crack. What he didn’t expect was that reforming the band would cause quite so much fuss or that there were quite so many people out there who cared.

“When I left the band, for me Iron Monkey was over. It was dead,” he snarls. “I got rid of a lot of my Iron Monkey shit. I was pissed off with everything that happened and I just didn’t want to know. I didn’t stay in touch with any ex-members. I paid no attention. I didn’t sit around listening to sludge bands. The next stuff I did was hardcore and black metal, and I’ve done that since I left Iron Monkey. The interest we’re getting now, it’s weird. The band’s a lot bigger now than we were when we were doing shit. But people forget that when we formed Iron Monkey version one, a lot of people didn’t like us. They didn’t like Johnny’s vocals. We were like fucking Marmite. So I guess I’m pleasantly surprised.”

Having found a new home at Relapse Records, Iron Monkey look well placed to capitalise on the myths and notoriety that now surround the band after nearly two decades of absence. What Jim is primarily concerned with at this point, however, is that after watching his vision fall apart once, he’s determined to make sure things go smoothly this time.

“This time I’m running the fucking show and I’ve got my two buddies with me and we’re calling all the fucking shots,” he avows. “That’s exactly how it should’ve been in the first place. I wanted to do a record that sounded dangerous. I wanted menace and swagger in it. Personally, a lot of the bands in the metal scene don’t have that. I wanted that fucking savagery and that aggressive, violent vibe.”

And seemingly from nowhere, Iron Monkey are back: to piss people off, to cause chaos and to bring riffs, grooves, vitriol and madness back to a scene that was beginning to get a little bit too comfortable.

“This isn’t music for people to get stoned to,” Jim spits. “This is music for people to hurl paving slabs through plate glass windows to. This is fucking gorilla music. I’m no fucking poser. Unlike most bands these days, there’s something genuinely wrong with me.”