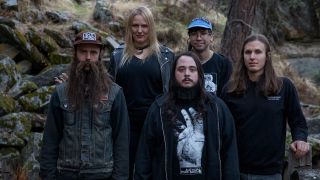 “Where there is light, there must be shadow, where there is shadow there must be light,” wrote famed author Haruki Murakami, and if it’s not an entirely original thought, that’s only because it’s so potent. If he ever came across Sacramento, California’s Chrch, no doubt he’d be lurching at both the sheer weight of their sound, but also at the extent to which they resonate with the light/dark duality that resides somewhere deep inside us all.

Due to be released on May 11 via Neurosis’s Neurot Recordings label, Chrch’s second album, Light Will Consume Us All, is driven by the fearless self-examination and move-any-mountain heft you’d expect from their hosts. But given the space to unfurl throughout its three, lengthy tracks, this is doom/sludge as psychic potholing, roving from claustrophobic crunch to dazed wonder, poking at deeply buried recesses of the heart and waking sleeping giants that lurk within.

Not only do we have an exclusive preview in the fevered, 16-minute form of the aptly titled track Portals, we have an extensive interview with three members of the band themselves; vocalist Eva, and guitarists Chris and Karl.

So be prepared to put yourself through the emotional wringer, then strangely feel much better for it, and scroll down for words of wisdom, experience and hard-won insight from Chrch, and tour dates too!

Light Will Consume Us All is often a harrowing experience, but it can feel redemptive too. Was making the album in any way plotting a course between those experiences, or at least did you get a sense of spiritual release making this album, however hard-won?

Eva: “My intention for this album is for it to be a bridge. A bridge between our lower and higher consciousnesses. A bridge between embracing the basest of our instinctual natures and the highest of our potentials. There is an aspect of acceptance within all of that. People often associate these ‘lower’ places as negative and the ‘higher’ spaces as positive, or difficult experiences as being worthless or negative and grasping for the ‘good times’. All is part of our human condition, and all should be appropriately celebrated. With that said, the celebration sometimes looks complete destruction. The human wants experience.”

Chris: “I feel like personal spirituality as a whole plays a large part in our approach to songwriting. Personal spirituality for me is based on life experiences and knowledge gained - both of which come with the pursuit of redemption and contentment from the extreme sides of depression and anger that we experience as humans. This record came from within all of this, and it’s rewarding to hear that it comes across in this manner. Life is harrowing but there is always a light at the end, no matter how dim.”

Karl: “I think that is just a part of living and I think honest music is a reflection of lived experience. I hope our music falls under this category. Making music definitely has a sense of spiritual release but it’s also a hard, often stressful process. Having an album to document a creative endeavour/period is really great and I feel lucky to have taken part in it.”

On a physical and psychological level, how much is playing in Chrch a discipline? What states of mind does the pace allow you to access?

Eva: “Being the conduit, I need to be in a place which allows me to access the emotional states and deep places the music facilitates. I’m learning about how much of myself to give without physically, emotionally and spiritually destroying myself in the process. In becoming a clear channel, there are certain protections that need to be in place. This project has pushed me beyond anything I’ve ever shared before; I’m learning and growing in that way.”

Karl: “This style of music can range from diffuse and expansive to dense and bludgeoning. I like a lot of different styles of music and the states of mind I access through those different styles. I think this music is both meditative and cathartic. Like you’re shedding emotional layers and often that’s painful and heavy. Slow music is very therapeutic to me. I love getting caught up in the texture of sounds that hang in between notes.”

Chris: It’s very much a discipline. You have to be in a certain state of mind to allow yourself to slow down to the pace we are at. On a personal level, the pace itself also allows my mind to reach deeper than I feel I typically can on a day to day basis. Sometimes that can be a dark place, but it also allows for deeper contemplation on what darkness and light truly are, and their relationship with each other.”

You’ve mentioned in the past that one background you all share is punk. Was there an ideal or perspective from that scene that’s driven you in Chrch? Willingness to confront and honesty seem to be common threads.

Chris: “I think it’s engrained in us to a certain point, so it’s definitely a perspective that drives us. We’ve grown from it but never out of it. Always confront and never conform.”

Karl: “My background is not in punk. I was raised on the music of the 60s and 70s. I started playing classical guitar at a young age and listened to a lot of extreme metal early on. I believe we do have a solid, hardworking diy type ethic though. Punk has always been in my radar but so has classical and noise and psychedelia and folk.”

Eva: “Honesty is something of immense value to me. The fact that people have responded to that aspect of our music is a wonderful feeling and compliment. The integrity I associate with the punk/diy ethic is in my heart and so naturally a part of everything I do. I am a big fan of confrontational and antagonistic music; I don’t feel like I bring a lot of that to this project, but then again, being female in a male dominated scene, my existence is confrontational.”

With Sacramento being so close to the sea and large forests, with deserts not so far away, how much do you feel your environment has had an effect on Chrch? Are there places within the city or nearby that allow for refuge or reflection?

Adam: “Sacramento is an intensely bizarre cluster of circumstances and variables that I frequently realize has a tremendous impact on me in frustratingly intersecting ways. I love it.”

Karl: “Music and the natural world are very closely involved in my life. Both give me a way to retreat and regroup but also connect with other people and be in the world. I think about the effects of place on art a lot and I absolutely believe the two are directly linked. I’ve spent a large part of my life outside in our general area climbing, backpacking and just exploring places. This time has changed me just as music has and the two are inseparable. Sacramento was built at the confluence of two major rivers (which at times violently flooded and destroyed the city). California has a very severe natural and human history and we live in its aftermath. As much as I get refuge and renewal from the land there is also a sense of grief and despair over what was and is still being erased through the course of history here.”

Chris: “There are so many places in Northern California, and the West Coast in general, that allow for refuge and reflection.I feel likeSacramento specifically is its own entity within Northern California because we are two hours away from every element (the ocean to the west, mountains and snow to the east, desert to the south, and even a large volcano to the north).Its hard to really put a finger on how it’s effected the music, but I definitely believe that it wouldn’t be the same had we not had such a broad environment surrounding us.”

Eva: “I live in the foothills of the Sierra Nevada mountains, just outside of Sacramento. We have access to some of the most beautiful and diverse landscapes - oak groves and rivers give way to red dirt and Manzanita heading northeast into the Pines and Alpine meadows. To the east the oaks succumb to massive granite slabs. northwest towards the ocean, you find ancient redwoods, ferns and soft beds of moss. These places, (and all places) are my church; and within them and from them, I become church. and you can be church, too (if you want it).”

And pre-order Light Will Consume Us All here!