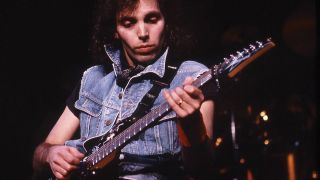 It’s exactly 30 years since Joe Satriani released Not Of This Earth, the calling-card debut album he financed by maxing out a credit card he’d received speculatively in the mail.

He’d grown up in Westbury, New York, and was a drummer initially, yet resolved to become a professional guitarist on the day Jimi Hendrix died – September 18, 1970. Steeped in the lore of Hendrix, Zeppelin, Jeff Beck and jazzier heroes like Wes Montgomery, he headed to California to stake his musical claim, giving lessons to a litany of now-famous players – Kirk Hammett, Alex Skolnick and his friend Steve Vai among them. His first proper group, power pop trio The Squares, are still well worth seeking out on YouTube, but he was destined to be a solo star.

Hard to believe, but Satch turned 60 this year. In the past three decades he’s become one of the modern era’s true axe heroes, rated by both widdlers and civilians alike. His guitaristic tics and fret-melting heroics – the devastatingly fast legato lines, whammy bar antics and mind-bending picking – have become part of the instrument’s vernacular, and while he’s often lazily lumped in with the shredbots, his musicianly qualities elevate him onto a higher plane: sheer invention, masterful tonal control, achingly human articulation and an unerring ear for melody. For all the fireworks, Satriani’s a songwriter first.

With 14 Grammy nominations to his name, he’s joined the likes of Jeff Beck in contributing to the resurgence of instrumental rock as a legitimate thing, and he’s prolific with it. Amid the regular touring, the guitar clinics, the guest slots with Deep Purple, Jagger et al, he’s made 15 studio albums (one every two years, give or take), a host of live records (many documenting his star-studded G3 guitar tours with Vai, John Petrucci, Robert Fripp, Eric Johnson etc) and two sets with The Little Supergroup That Could – Chickenfoot.

Just one ’Foot LP makes our guide, because Satriani is ultimately a star in his own right, a lone wolf who’s very comfortable centre stage. He may not shift the units he did back in those days of free credit cards (who does?) but he’s still out there, playing his ‘strange beautiful music’ on his own terms, communicating in a language others struggle to mimic, one that uncommonly large numbers of fans want to hear. Not of this earth indeed.

The bedrock of any Satch selection. With over two million units shifted, it’s his Led Zeppelin IV, his Electric Ladyland, his Wired, and it lays out most of his trademark moves early. Listen to the chunky phrasing on the title track, and its speedy, beautifully executed ‘solo’.

The crunchy Ice 9 might be even better, showing off his chops and use of tonal colour, and he’d never leave a venue alive if he didn’t knock out upbeat signature rocker Satch Boogie or the Grammy-nominated Always With Me, Always With You, whose hummable melody is gorgeous, its fingertapped sequence a highlight of every show.

A decade after Surfing, Satch had gained a worldwide reputation, a sexy Ibanez ‘Chrome Boy’ guitar, and had a new bald head and shades combo that only added to his alien aesthetic.

Crystal Planet shows him regrouping after his one real misfire (see ‘Avoid’), remembering what his core strengths are and then taking them into orbit, on the title track and mind-bending opener Up In The Sky. There’s bluesy groove (House Full Of Bullets), weirdness (Trundrumbalind) and the kinds of lyrical, noodly rockers he makes sound easy (Lights Of Heaven).

Experimental, rocking, packed with technique and songwriting ideas, he’s firing on all cylinders.

Surfing’s follow-up proved that it wasn’t a fluke, and also that its author is a far better guitar player than a singer. He gives it a damn good go though, and even manages to pull it off on Big Bad Moon (Canned Heat’s On The Road Again on steroids) and touching ballad I Believe.

Six-string banjos and blues harmonica add depth, and in parts, the guitar playing is just insane: the controlled feedback of the title track, The Mystical Potato Head Groove Thing’s arpeggios (played left-hand only, just to rub it in), while percussive double-hander The Forgotten is just showing off, really.

Friends and Summer Song were hit singles, and Relativity’s parent label Sony used the breezy latter in TV ads for its cutting-edge Discman. This helped nudge Satch’s fourth LP to No.22 on the Billboard 200, the highest album chart placing of his career.

Along with the preternatural skill on the instrument comes some real inspiration: the title track earned him a Grammy nod, the moody New Blues hinted at unplumbed depths. An expression of grief for his recently passed father, Cryin’ was recorded in one take as a guide track for his rhythm section, moving engineer Andy Johns to tears in the control room.

The namesake of his publishing company and subsequent 2014 memoir, Strange Beautiful Music more than lives up to its name. Openers Oriental Melody and Eastern Belly Dancer are richly exotic, drawing on Eastern scales. Seven String sees him channel the dirt and bass that low-B string gave to that decade’s rock; the earthy Starry Night is as near as he’s got to country, earning him his Grammy nomination.

Meanwhile, You Saved My Life and What Breaks A Heart ooze humanity and feel. Add to that an evocative take on Santo & Johnny’s Sleep Walk and there’s much to like here.

As with most enduring artists, many of the fan favourites reside in the earlier recordings, but Satriani’s quality control remains high, and his thrilling current album is every bit as inventive as his earlier work.

With the skanky Crazy Joey, hooky In My Pocket and the shuffling On Peregrine Wings, this one’s packed with tunes, ideas and technical flash that has you rewinding in disbelief.

Good - Satriani albums that are worth exploring

Jeff Beck did it best on You Had It Coming, Gary Moore much less so on Dark Days In Paradise, and here Satch convincingly brings electronica and dance/drum’n’bass beats to his trademark rocky mix.

The combination of cutting‑edge synth and rhythm tech with his state-of-the-art guitar style paid dividends on his first 21st-century release, notably on Flavor Crystal 7 and Borg Sex. Attack’s as bellicose as anything he’s done; Until We Say Goodbye is a human heartbeat among the circuitry.

It may all sound slightly dated, but this is an artist straining at the leash to push himself forward.

Professor Satchafunkilus And The Musterion Of Rock (2008)

Even in the latter albums that didn’t make our guide there are always nuggets, and this has more than most. The title’s a mouthful, the music’s an earful.

By turns funny, elegant and experimental, this is the ideal mix of restraint (Come On Baby, Out Of The Sunrise), avant-garde jazz smarts (Diddle-Y-A-Doo-Dat) and rawk histrionics (Musterion, I Just Wanna Rock). His tribute to the eponymous Turkish saz player Asik Vaysel is tasteful but rocks hard. Tasty US sales too: to date, it’s his last album to hit six figures in the States.

Stemming from a jam at Sammy Hagar’s Cabo Wabo club, this supergroup (Michael Anthony and Chad Smith complete the line-up) led to a couple of world tours and two studio albums.

The fun, self-titled debut went Top 5 in the US in 2009, shifting half a million copies, and while this sequel didn’t sell nearly as well, it’s the better record.

Everyone’s gelling, and with Satch and Hagar at the centre, the songs are sound, from gleeful riff-rockers (Alright Alright, Big Foot Up Next), to more thoughtful moments (Three And A Half Letters, Something Going Wrong).

AVOID - one that you should maybe steer clear of

Seek out the excruciating documentary REEL to see why this one misfired. To distil his playing to his most raw and rootsy, Satriani is put in a live room with bassist Nathan East, guitarist Andy Fairweather Low and drummer Manu Katché. First-rate session musicians all, but there’s zero chemistry here.

Usually the captain of the ship, Satch is clearly all at sea in this quasi‑band situation, and he even remonstrates in that mild‑mannered way of his with producer Glyn Johns.

The material’s fine – just oddly ordinary and flat, lacking that usual incandescent spark. He never sounded less like himself than on his self-titled album.

Joe Satriani: dizzying in the dankness