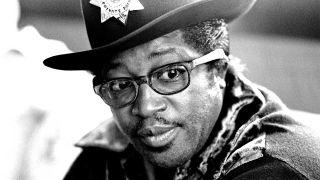 With his thick, black-rimmed glasses, vibrant red and black plaid jacket and custom made Gretsch guitar with its rectangle shape, Bo Diddley cut a striking presence, as did what he called his “freight train sound”, a combination of distorted, frenetic rhythm guitar playing and ferocious maraca shaking, the latter thanks to his musical partner, Jerome Green.

Not the most prolific artist, preferring to concentrate on live performance he, nevertheless, released 24 studio albums, six live albums and 37 singles in his lifetime, most of which were recorded for the Chess label with whom he found success from the off with his 1955 debut single, the self mythologising Bo Diddley backed with I’m A Man. It landed him a US R&B number 2 hit and its influence is incommensurable. Along with a string of future classics including Diddley Daddy, Who Do You Love?, Roadrunner and Say Man, it not only aided the smooth passage of blues and R&B to rock’n’roll, but also gave rise to the 60s British beat boom. The Pretty Things named themselves after Bo’s song of a similar name; the Rolling Stones, Manfred Mann, The Kinks, The Animals and The Yardbirds all covered his material. More recently The Strypes have also paid tribute.

Born Otha Ellas Bates in McComb, Mississippi in 1928, Bo Diddley moved to Chicago, started playing violin as a boy in the Baptist church, then took up the guitar and plied his trade in The Hipsters and the Langley Avenue Jive Cats on the city’s street corners. As a soloist, he graduated from blues clubs to New York’s Carnegie Hall, playing there in 1955. In 1957 he wrote Love Is Strange, a US hit for Mickey & Sylvia; in 1967 and ’68 with Muddy Waters, he recorded Super Blues and The Super Super Blues Band. 1966’s Ooh Baby provided his last hit single. His final album, 1996’s A Man Amongst Men, featuring Ron Wood and Keith Richards, made the US Top 10 Blues Chart.

The Story Of Bo Diddley: The Very Best Of (Chess)

A ‘best of’ is often seen as a cop out, but this 54-track double CD really is essential for both the Bo neophyte and the connoisseur.

For a start, it contains the entirety of Bo Diddley, his 1958 first album for the Chess label. A 12-track compilation of his early singles, it’s where it all began, not just for Bo, but for rock’n’roll and R&B. Spanning his inaugural self-titled single to his ninth 45, the thrilling Hush Your Mouth, taking in Pretty Thing, Diddy Wah Diddy, Who Do You Love? et al, it’s the perfect encapsulation of what made him so great. There’s distorted guitar squalls, Jerome Green’s brazen maraca shaking and the Bo Diddley beat, alternatively known as the shave and a haircut two bits, and more commonly, in musical terms, the clave rhythm – it goes bomp, ba-bomp-bomp, bomp-bomp – providing the backbone throughout.

The rest of The Story Of Bo Diddley traces his development as he hits his creative stride, first with Peggy Jones and then with the Duchess, through successful experiments in doo wop, country, funk and rap – Say Man, his sole US pop Top 20 hit, can be seen as a blueprint for the latter with its quick-witted vocal sparring.

The compilation also emphasises his hugely important role, not just in the evolution of black music, but in white rock too – as British blues catalyst inspiring a generation including Eric Clapton and the Stones with songs like You Can’t Judge A Book By The Cover and celebrated B-side (I Need You Baby) Mona and as a punk and grunge incubator. The New York Dolls covered the saucy Pills; Dr Feelgood the jerky I Can Tell; The Clash took Bo out on the road on their 1979 US tour.View Deal

Superior - The releases that built his reputation

Have Guitar Will Travel (Checker)

Peggy Jones had joined Bo on guitar on 1959’s Go Bo Diddley but on its 1960 follow-up they scaled new creative heights. Providing a platform for his conversational storytelling skill and gnarly guitar style, it features the singles Cops & Robbers, a comical tale of a liquor store robbery and Say Man, Back Again, the hip speak follow up to Say Man. Mumblin’ Guitar, a grumbling instrumental, predating grunge by three decades. Available on a CD twofer with In The Spotlight, his fourth album, also from 1960 and another winner.View Deal

Bo Diddley Is A Gunslinger (Chess)

His first album to be recorded in his home studio in Washington DC and his first without any input from Chess owners Leonard and Phil Chess, 1960’s fifth album cast Bo as a country-based singer on nine originals and a cover of Ernie Ford’s Sixteen Tons, a song Bo was due to perform live on Ed Sullivan’s Toast Of The Town TV show in 1955. He played his then current single Bo Diddley instead and the unimpressed host refused to have him on the show again. It’s ace from beginning to end, the sleeve artwork too, with Bo’s cowboy look inspired by The Magnificent Seven.View Deal

Chess got the tapes rolling at the Beach Club in Myrtle Beach, South Carolina on July 5 and 6, 1963 to capture Bo’s stage show. One of the nights came to an abrupt halt after the police were called when Jerome Green jumped into the crowd and danced with white female audience members – it was a segregated venue – but there was still plenty of material to choose from, including the rollicking I’m All Right later covered by the Stones, plus a rowdy rendition of Chuck Berry’s Memphis.View Deal

Muddy Waters made Electric Mud, Howlin’ Wolf The Howlin’ Wolf Album, and so The Originator moved with the times, looking to Sly And The Family Stone and Parliament-Funkadelic on this 1970 album of hard funk grooves. Still unmistakably Bo, with its bashed out beat and audacious jive talkin’, but it’s pinned to a canvas of propulsive Hammond, deliquescent bass, fluid drums and call and response gospel background vocals. Stand out tracks: the frenzied Elephant Man; the rockin’ Bo Diddley update, You, Bo Diddley.View Deal

Recorded at Ter Mar Recording Studio in Chicago in 1964, this guitar duel between Bo and his pal and Chess label mate Chuck Berry captures the guitarist at his most loose and carefree on three of the album’s four tracks. Two, Chuck’s Beat and Bo’s Beat are spectacular off-the-cuff jams clocking in at just over 10 and 14 minutes respectively. Also included is Bo’s rousing take on When The Saints Go Marching In, plus the Chuck Berry instrumental original Liverpool Drive.View Deal

Diddley wasn’t a surfer, he also appeared on just four of the 12 tracks on this 1963 album. The rest feature Sun rockabilly Billy Lee Riley and the Megatons, which means the playing is by no means bad, it just isn’t Bo. Sadly the material is simple surf craze cash-ins with silly titles (Piggy Back Surfers, Surfboard Cha Cha and Twisting Waves). There’s also a misguided attempt to turn Ol’ Man River into a twanging instrumental.View Deal