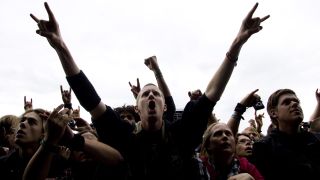 In the latest issue of Metal Hammer we count down the 100 greatest albums of the 21st century because, let’s face it, there’s been a lot of incredible music over the past 16 years. But the list did prove there’s an issue when it comes to homegrown talent as just one British band made it into the top ten – Bring Me The Horizon with Sempiternal, and only 19 in the top 100.

This isn’t a recent problem. British metal hasn’t had a genuine world-beating band since Bullet For My Valentine emerged ten long years ago. Since then we’ve seen hundreds of bands across the world attempt and succeed in claiming the hearts of the British Isles, whereas we seem incapable of finding a ‘mainstream’ metal band of our own – a sorry state of affairs considering we invented the genre in the first place.

So, what’s gone wrong? In the past 16 years, three major movements have occurred in metal and alternative music – nu-metal, emo and metalcore – and these were all dominated by American artists. There was no legitimate UK response to nu-metal, UK emo lacked genuine starpower compared to My Chemical Romance, and our best metalcore bands are dwarfed by the likes of Killswitch Engage.

But perhaps we don’t want British bands any more. Maybe as fans we’ve grown so jaded, and so infatuated with celebrity culture that a band from Plymouth just doesn’t cut it any more and we want something more ‘exotic’.

The USA has always been the louder and more charismatic cousin of the UK, and their bands are living, breathing proof of that. American bands ooze attitude and reek of coolness, and on the whole are a lot more media trained. But more importantly, the States have a solid touring infrastructure in place so they can play more and in turn get better, while all over the UK iconic music venues are closing.

British metalcore giants Asking Alexandria noticed this sea change, and as they gained notoriety in the UK they moved to America where the fans and the money are. It’s hard not to be impressed by the wealth of talent pouring out of the States, while the UK metal scene has produced nobody approaching the size of Lamb Of God this century. The only band that comes close are Bring Me The Horizon but after years of being wrongly shunned by metalheads they’ve cut their losses and aimed for a more accessible style of music, and are now more popular than ever. We had a good thing but we fucked it for ourselves.

Of course we can’t actively make bands write better music, but we can try to find the best British metal possible by following our favourite UK labels. Although, in recent years this is becoming harder and harder as the former titans of all things heavy are now resided to signing classic rock bands hoping for a revival. This is actively damaging the metal scene labels like Peaceville, Earache and Music For Nations cultivated back in the day, and so we’re stuck with Rival Sons supporting Black Sabbath. As a culture we’ve become obsessed with America and the glamourous lifestyle bands live across the Pond. The grey, grimy backstreets of Stoke offer little by way of escapism compared to a band from Los Angeles.

So is it a case of British metal being harder to market in 2016? Is it uncool to be from the UK? Magazine covers are plastered with American bands exuding attitude and swagger, something we just don’t have any more. Bravado isn’t a British trait, we’re reserved and stand in corners at parties hoping nobody will notice us while America is swinging from the curtains. Critics are already compiling their end of year lists and they’re overrun by bands from overseas. The likes of Gojira, Amon Amarth, Nails and Letlive will all undoubtedly feature at the top end of whichever Albums Of The Year list you care to read, and we’re eagerly awaiting USA heavyweights Metallica and Avenged to drop a new album soon. Where is our Avenged Sevenfold?

Thankfully, some work is being done to fix this problem and in 2016 British metal is in good health. Independent labels like Cacophonous Records, Basick and Holy Roar are dedicated to signing the best heavy bands the UK has to offer like The King Is Blind and Svalbard, while Bloodstock festival’s New Blood stage is a haven for homegrown heavy metal. But that’s not enough. These bands aren’t going to get on primetime radio or headline Wembley arena and this needs rectifying. Bands like Architects are doing great things for metal in the UK, as are While She Sleeps, Black Peaks and Bury Tomorow, but it’s unlikely any of them will headline Donington like Linkin Park or Slipknot. Our biggest bands are all over 50 years old and will call it a day soon, leaving us with no big British metal bands at all.

But we can stop this. We can invest our time and money in going to see young local bands, we can buy their CDs, wear their t-shirts and be proud that when we invented heavy metal 46 years ago we knew it was here to stay. Because otherwise we’ll have to reside ourselves to a world of bands that only pop over once every two years, or even worse, a UK indie revival.

What do you think about the state of British metal?