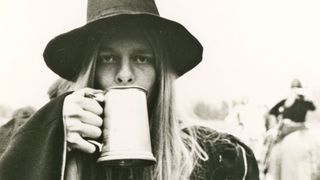 As any socio-economics expert can tell you, when a group expands there are bound to be problems. Any group that gets too large becomes hard to manage and it’s human nature to want to branch off into smaller tribes. Another problem with large, established groups is the need to reassure new members that they are welcome and as much a part of the ecosystem as anyone else. Now that progressive music has entered its second renaissance with an explosion of fresh talent flooding the airwaves with exciting sounds and fascinating compositions, this has naturally led to an influx of fresh-faced fans eager to join
in the conversation both on and offline.

While there have been some absolutely fascinating discussions, there is one question that has raised its ugly head time and time again:

This banal line of questioning sends a shiver down my spine as my forehead swiftly meets my hands for a little rest. It’s usually well-natured in origin but causes a large and collective moan from across the community. This isn’t to say I don’t understand the reasoning behind it: everyone wants to know if their favourite artist fits in with everyone else’s. We need to feel included, especially when we’re new!

With the internet (for better or for worse) giving everybody the ability to take part in global discussions regarding their niche, this question has become prolific across the board. You’ll see it crop up in almost any thread regarding the subject of prog. While seemingly innocuous, it’s bound to put a multitude of people on the back foot and will lead to responses made harsher by the relative anonymity a forum can bring.

The answer to the question is very simple: if it feels like the music transcends what you consider ‘normal’ or ‘mainstream’, then the likelihood is that, yes, it’s prog.

Prog doesn’t care that you didn’t like Mikael Åkerfeldt when he sounded like a lion. It doesn’t matter what your opinions are about Genesis post Peter Gabriel. Prog doesn’t care if you think a particular King Crimson album isn’t using enough wafty time signatures. As a musician who’s played his fair share of venues, I can tell you that half the bands you call prog will undoubtedly be referred to as ‘rock’ by most landlords and venue owners anyway.

Prog is an over-arching concept; one that’s just as nourishing, exciting and indeed broad today as when it started. At the end of the day, it doesn’t matter if no one else but you thinks a band is prog or not, because for you that band is special, transcendent, and evokes emotion. That’s what prog really is, friends.