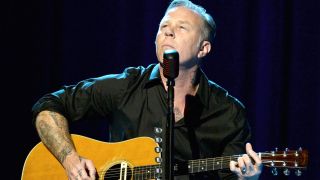 Intent on dispatching James Hetfield to hell for his narration over bear-killing documentary series, 'The Hunt' for The History Channel, the online petition aiming to ban Metallica from performing at Glastonbury has mainly served to highlight the 'people power' aspect social media can muster.

What it will most certainly not do, however, will be to actually put a stop to the San Francisco-based quartet’s performance at Worthy Farm on June 28.

Art is supposed to elicit a strong reaction. The art of music can fuel our emotional responses, pull at our heart’s strings and inspire our body to release oxytocin (the ‘bonding hormone’). But it may also test our core principles and offend us in the process. Chris Brown’s assault on Rihanna in 2009 has not helped him shift any extra units: violence against women will not be tolerated. Since his arrest on child pornography charges in 1999, the number of people who have wanted to be in Gary Glitter’s gang has noticeably shrunk. More recently, the revulsion felt when Lostprophets frontman Ian Watkins pleaded guilty to child sex offences was redoubled when his lawyer stated that the singer was expected to earn in excess of £100,000 from a spike in internet searches during his notorious trial. Personally, I simply defenestrated my copy of their debut album _Thefakesoundofprogress: _ Ivar Peersen, guitarist of Norwegian band, Enslaved did something similar back in 1993 when Burzum’s Varg Vikernes pleaded guilty to the slaying of Euronymous of Mayhem. “I broke all my Burzum vinyls in two,” he admitted. “I stomped on them and threw them in the trash. I loved Burzum, but I didn’t want to have any part in that shit.”

(Having served 16 years for murder, Vikernes was released on parole in 2009, but was arrested again in France in July 2013 when his wife was found buying rifles, an action which aroused police suspicion due to her husband’s history).

With other ‘problematic’ behaviour, the backlash is less discernible. In the mid ‘70s, David Bowie’s statement that Britain “could benefit from a fascist leader” merely raised eyebrows, when allied to comments such as “I believe very strongly in fascism, people have always responded with greater efficiency under a regimental leadership…Adolf Hitler was one of the first rock stars.” A rumoured affair between Bowie, his wife Angie and 13 year old Lori Maddox similarly did not set alarm bells ringing as it might in this day and age: Maddox, as documented in Hammer of the Gods, went on to conduct a (secret) relationship with Led Zeppelin guitarist Jimmy Page when she was 14 and he was 28. Such relationships weren’t confined to the 1970s: The Rolling Stones’ ex-bassist, Bill Wyman’s had a special friendship with schoolgirl Mandy Smith - whom he went on to marry when she was 18 - in the late ‘80s. People grimaced at the idea of these affairs, but nobody petitioned to have The Rolling Stones or Led Zeppelin thrown off a festival. Somehow, people felt that these tales were part and parcel of a new and booming alternative rock ‘n’ roll lifestyle.

The current hate wave aimed at Metallica’s Glastonbury performance is more of a confirmation that, these days, our tolerance levels for rock stars’ personal eccentricities are way lower than they were back in the past. Yet, when I received a request to sign the anti-Metallica petition on Facebook, I abstained from doing it. I am vegan for ethical reasons and I might be expected to follow the herd, but as cruel a sport as bear-hunting is, Hetfield does not make a living out of killing animals. It was a hobby that he left behind a few years back (I would love to ask him why he chose to stop, if anything). Ultimately, our reaction to the perceived transgressions ought to fit the crime. Unless these rock stars’ convictions threatened the security, balance and comfort of the galaxy we happen to inhabit, we should just lighten up and enjoy the music. As Nietzsche once said:-“We have art so that we may not perish by the truth.” Let’s make the most of it.