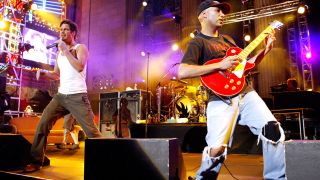 “Do you know this song?” she asked. “It’s by one of your type of bands apparently.”

On the page were printed two words: Audioslave Cochise.

You may know this song. It sounds like Led Zeppelin playing a private gig inside a helicopter. It was the world’s introduction to the louder-then-life bombast of Audioslave, the quartet formed from the ashes of Soundgarden and Rage Against The Machine on this day in 2001. And chances are that the first time you heard it dovetailed perfectly with the first occasion on which someone felt compelled to inform you that Audioslave were utter shit.

The problem with Audioslave is easily identified. They weren’t Soundgarden, and nor were they Rage Against Then Machine. And by virtue of not being either of these bands - two of the best-loved and most influential bands of the ‘90s - ergo, they must be rubbish. Nevermind that they united the best singer in the rock world, with one of the world’s most innovative guitarists and a rhythm section that could punch holes in mountain ranges, this simply would not do.

In truth, Cochise marked the absolute high point of Audioslave’s career in critical terms. Their self-titled debut album was roundly criticised, their headline performance at the inaugural Download festival in 2003 – foisted upon them when Limp Bizkit pulled out for reasons never properly explained - was rubbished, and by the time the quartet’s more nuanced, expansive second album Out Of Exile emerged in 2005, Audioslave were already out in the cold, as far as British rock fans were concerned [though it did debut at the top of the US Billboard charts]. When Audioslave album number three, Revelations, was released in September 2006, the band didn’t even bother touring it. And within six months, it was all over, as Chris Cornell announced his intention to focus upon his solo career. Amid the euphoria that greeted the inevitable Soundgarden and RATM reunions, it was easy for rock fans to forget that Audioslave ever existed at all, and the world’s least loved ‘supergroup’ were placed alongside St. Anger, Judas Priest’s unreleased Stock, Aitken and Waterman demos and Chris Cornell’s cover of Billie Jean in a lead-lined box marked ‘Things That Should Not Be.’

Which is rather a shame, really. Because at their best – on Cochise, on the rather beautiful Be Yourself, on the playful Doesn’t Remind Me and the slow-burning Like A Stone – Audioslave were a terrific rock band, a true force of nature, with genuine heart, balls and soul. It wasn’t quite ‘Led Zeppelin meets Earth, Wind & Fire’, as Tom Morello once pitched the group to Rolling Stone, but they were a damn sight more powerful and imaginative than 99% of the nu-metal half-wits with who they were obliged to share festival stages and magazine pages at the dawn of the decade.

When I showed my daughter how to pick out the main riff to Cochise on her new guitar last week she disappeared into her bedroom for the rest of the night to practise it: she’s no Tom Morello yet, but time is on her side. Sadly, the same can’t be said for Audioslave, who were operating on borrowed time from day one. Thanks for the memories gents.