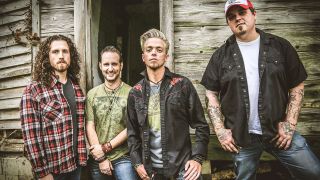 It’s perhaps a cliché that those from the South of the United States value their family ties more than most. Here, as the band’s Experience Kentucky: An Evening With Black Stone Cherry tour arrives in the UK, John Fred Young talks about the close bond with his father and uncle that taught the drummer about music, and provides an insight to his life away from the stage.

The last time Black Stone Cherry were in the UK was at this summer’s Ramblin’ Man Fair – your first major festival headlining appearance. Were you nervous before you went onstage?

We’d headlined the second stage at Download twice before, but yeah of course we were. And I’m so thrilled it happened at Ramblin’ Man. I still remember sitting on the toilet and reading about that festival for the first time in Classic Rock magazine, hollering for my dad – ‘come and look at this! You guys [the Kentucky Headunters] must play that festival.

At that point the Headhunters had yet to play outside the US. How much did you have to harangue them?

I started working on him right away. Those guys ended up doing an eight-day tour of the UK and they made it to Ramblin’ Man.

Afterwards, did you turn around to your dad and say: ‘We told you so?’

I did, because it made me so proud of him. He was terrified of flying so getting him onto that aeroplane was a massive, massive deal. He hadn’t ridden a metallic bird in two decades, but once he was on there he said, ‘Man… you can drink beer on these things?’ It wasn’t a big deal anymore.

Both bands share a practice room in Edmonton, Kentiucky. You dad jokes that your mum calls the place ‘The He-Man Woman Hater’s Club’…

It’s just like the movie The Little Rascals. No girls are allowed. But you know, I think he called it that because as teenagers he had wanted to get it into our heads that women shouldn’t be distractions [to the band]. When Chris [Robertson, BSC frontman] and I first went there we had no idea about music. Our band grew up in that place. We’ve jammed to everything there from Howlin’ Wolf to Adele, Lamb Of God – we’re open to anything. Maybe that’s what makes our brand of rock ‘n’ roll a little different?

BSC are doing well in Europe, but it’s a harder battle in the band’s American homeland. Has moving to a new label, Mascot Records, made a difference?

Oh man, things are unbelievably better. Roadrunner was a huge label when we signed to them but after they got bought out [by Atlantic] things became corporate very quickly. We knew that if the next album [Magic Mountain, 2014] didn’t do well, we were gone. And that’s fair enough, it’s a numbers game.

Here in Europe the band were headlining arenas at that point.

And they were almost sold out, but when we came home things went quiet with the label. No emails, nothing. Finally, Chris sent them a letter and… we got fired. [Laughs]. It was wonderful, one of the greatest experiences of our lives. I still miss some of the people we worked with there, but what happened provided a brand new start. Mascot allowed us to make Kentucky with no interference or demands about writing for rock radio.

Ratt’s Bobby Blotzer recently said that “live music may not even exist in a decade or two.” Is he right?

Well, I see where that opinion might come from but I don’t agree. Ratt came from the 1980s world of arenas and those were different times. I was too young to know much about it but my dad’s band were the Guns N’ Roses of the country world. The Headhunters played Farm Aid with GN’R [in 1990] and dad used to say those days were the pinnacle of rock music.

Social media has changed everything and we are becoming a very disconnected species, but I really don’t think live music is doomed. As long as parents teach their kids about rock‘n’roll, and I’ve taught mine, it’ll never die.

What do you like to do away from the band? Rumour has it that you collect antiques.

That’s right; it came from my grandfather who passed in April. He drilled it into me: ‘Don’t go buying new furniture’. I buy things out on the road and my wife and I are filling our new home with beautiful old antique furniture – especially made from English oak, my favourite pieces are the 17th Century ones. I always wanted to be a knight in shining armour – having a hallway full of those pieces is about the best I can get to it.

Black Stone Cherry start their tour this week - see the full dates below.

Black Stone Cherry - How We Made Kentucky