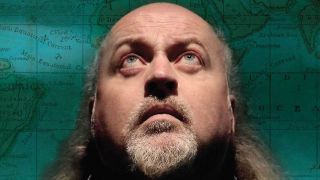 We all know Bill Bailey is a metalhead – he’s performed at Sonisphere festival, he’s won a Metal Hammer Golden God, and can absolutely shred – but how metal is he? We put the skulletted comedian to the test by finding out some of his more colourful stories. Warning: contains puke.

“Apart from stealing stuff out of people’s trolleys in supermarkets? Well, that’s not illegal, really, it’s just immoral. When I first started in London I was in this bar, and they had Special Brew on a special promotion. I’ve never seen anyone in a bar drink Special Brew, and I’m willing to bet they never did it again, but it had quite an effect on me and my mate; we thought it would be a good laugh – and I have to stress that this is not a good idea, to drive to Buckingham Palace – and we were arrested for driving round and round the roundabout, throwing bottles at the gates of Buckingham Palace and shouting ‘Fuck off, Queenie!’ I say this now as a parent: we were rightly arrested.”

“Off the top of my head, I’d say The Satanist by Behemoth. That’s about as intense as you can get. It’s extraordinary, it is the music that Orcs would listen to before a big battle.”

What is the worst injury you’ve ever had?

“I was trekking across a jungle in Indonesia during rainy season, and I had terrible sorcery of the guts and I was delirious. I walked out over what I thought was a bridge over a river, but it was actually nothing. I fell 15 feet in pitch black, went over on my ankle and tore all of my ligaments. It was quite something that I didn’t die! I was naked with all these chickens pecking round me and thought, ‘This is the end!’”

What’s the grossest thing you’ve had in your mouth?

“It was at the same time in Indonesia: they eat fruit bats and for this show we were doing, just to show you could survive on these things, I had one fricasseed in a wok. It was just disgusting. There’s no disguising it’s a bat! It had wings, a head and claws! It was really leathery. There’s not much flesh on the head, and it wasn’t in a crazy, Ozzy kind of way either. It was vile!”

“The repulsion of the bat! It caused an eruption, I’ve never been so sick. I didn’t believe in projectile vomiting until I saw it coming out of my own mouth like a Godzilla flame. Even though it was disgusting, I did think, ‘This is a skill I’d like to have.’”

“I’m a pacifist – I abhor violence – so I’ve never had to be in an actual dust-up. But I did get into a legal fight with Universal, who threatened to ruin me, and we won!”

“Yesterday, when I was bitten by one of our chickens. The wife likes to collect these rare animals and we got these Malay fighting chickens, but the fight has been bred out of them… except this one. They’re big, the size of a toddler, and he hates me! He chased me across the garden and ninja-kicked me in the back of my legs with his talons, so I got this big cut down my leg.”

“I’ve got a rare Gong t-shirt. I had to play a drug dealer in a film and someone found an original t-shirt and I got to keep it!”

“I got a piercing in my left earlobe. There was this girl I really liked at college and she said, ‘I’ll pierce your ear for you’ and I thought it would be a proper medical procedure, but it was just a needle and an ice cube. I couldn’t even moan because I was trying to impress her!”