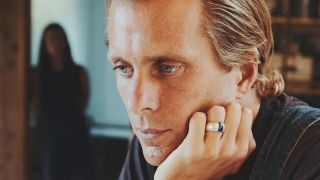 In terms of rags to riches tales, Aaron Bruno’s story is pretty textbook. Having been left battered and bruised by a series of unfruitful record deals with his two former bands – post-grunge posterboys Home Town Hero and alt.rock group Under The Influence Of Giants – by the time 2007 rolled around, Bruno found himself at rock bottom – broke, blacklisted and searching for solace at the bottom of a bottle.

But then, in 2010, something amazing happened. Bruno’s newest musical guise, the electro-heavy alt-rock project AWOLNATION, tentatively released their first single, Sail. Seemingly overnight, the song was picked up everywhere. Radio stations who had previously told him he was finished were pushing it to the top of their playlists, TV shows and high-profile commercials were clamouring for usage rights. After 10 years of failed attempts, Bruno had finally made it.

Cut to now – almost 10 years later – and Bruno is on the cusp of releasing AWOLNATION’s third album. Where Bruno’s previous two albums – 2011’s Megalithic Symphony and 2015’s Run – were heavy on the electronica, hammering the sorts of synthetic sounds Bruno will later refer to as “the bells and whistles”, new album Here Come The Runts swaps that almost entirely in favour of a more “organic” indie rock sound.

“I just wanted a real feel, because I think that lasts the test of time,” Bruno tells TeamRock from his Malibu home. “As I grow older, there’s only so much music you can listen to. I’m always discovering new music at all times, and one thing I’ve found is the singer-songwriter lasts – at least to me. Trends come and go – whether it’s electronics or synthesisers, certain kind of beats, certain kind of drum sounds – but it always goes back to the lyrics and some sort of chord progression, be it a guitar or a piano. So that’s where I’m at now, and I think a lot of people feel the same way – it’s time to make a change. [The new album] doesn’t have all the bells and whistles, and bells and whistles are the obvious plastic sounds.”

The 80s pop-rock bands that Bruno grew up listening to are chief among his influences on the new album. “A lot of the record was written – at least here in the States – in a massive time of turmoil, and it still is,” Bruno explains. “And it was like, okay, well, we clearly need some sort of escape from the bullshit that’s going on, and I felt like a lot of records did that in the 80s. I was so moved by Dire Straits’ Brothers In Arms and Bruce Springsteen’s Born In The USA and all The Cars albums and Michael Jackson and Prince, and I felt like I wanted to make my version of those records that felt very uplifting, even though if you read through the lines, the lyrics are touching on subject matters of struggle and pain. [They] find a way to look at the joy, to look at the glass half-full, so lyrically I approached the record that way. There’s always going to be some sort of darkness looming, but behind the clouds there’s sunshine. It’s about trying to get through those clouds, and I hope the record makes people feel that way.”

While the album shifts its focus and sound, to call it a conventional indie album – or a simple homage to the albums of Bruno’s youth – would be a massive misrepresentation. The opening title track is a breathless amalgamation of 70s punk beats, grungy guitars and furious heavy metal riffing – “You can’t go a whole career and not have an Iron Maiden gallop in one of your songs” – all polished up with a modern pop sheen, and while the “bells and whistles” might not be in the spotlight, they’re still very much there. “It’s a little different, of course,” admits Bruno. “[But] even the electronic aspects of the album, if there’s a synth here or there, [have] got more of an analogue feel than some dubstep kind of trap thing.”

Second albums are notoriously difficult to make – something Bruno acknowledges blighted the creative process with Run, even if those struggles weren’t reflected in its commercial success. So how did the third record fare in comparison? “It felt really liberating, and there was a lot less pressure,” says Bruno. “After surviving the second record and having success with that, it helps you to feel encouraged to continue to make music. There’s a certain kind of focus on this record that I’ve never felt before. Maybe it’s just the natural progression of maturing, maybe it’s the point I’m at in my life where I’d like to think I’m getting better – always trying to push myself to write a better song, or produce better, or write better lyrics. I felt much more of a focus on this record, and the story I wanted to tell is a very exciting story.”

This story Bruno references would be that of “the runts”: the underdogs, the average Joes – similar to the Bruce Springsteen-style protagonists Bruno so admired – who are “walking around thinking ‘Alright, maybe, just maybe, I’m going to do okay,’ and then [they get] slapped down”. It’s a thread which runs through the album, tying each song together as they go.

“Then [the runts] build themselves back up and go on this whole journey of life – and when, all said and done, life becomes pretty difficult and intense, here it comes – stop that train,” says Bruno in relation to the album’s epic, metal-tinged finale, Stop That Train. “And that could be a really positive thing because he’s found a way of standing up for himself [by getting off the train], or [it could be that he’s just] found that life is a lot to handle. Having those little more light-hearted moments in songs about love and relationships is what really life’s all about. It takes you on a journey.”

“We go through each day thinking okay, how are we going to eat? Or how are we going to make money? And all those things,” continues Bruno. “When really, at the end of life, when you’re faced with the end of your days, the real question comes in hand: what now? Or what next? Those are the sorts of questions that fuel most of my thoughts, lyrics and study. You can ignore it all you want, but one day we leave this Earth, what happens next? It’s terrifying and it’s exciting all at once, and that’s kind of what the record’s all about.”

The album’s lead single, Passion, sets out Bruno’s stall pretty accurately both in terms of the album’s sound and its lyrical ambitions. “Passion is such a funny thing,” explains Bruno. “It’s such a commonly used word, but once you find what you’re passionate about in life, you’ve found your destiny, in my opinion. Hopefully [the song] tells people to ask themselves, ‘Well, what is it I’m passionate about?’ And maybe some people are sitting there driving in their car, reading a review thinking ‘Damn, I haven’t thought about that in a while, I want to get back to the things I love to do, that make me feel in life’. So far the reaction has been such that people are definitely motivated to get back into whatever their calling is, and a lot of it’s positive.”

So, 10 years ago, standing on the lip of the abyss and just about ready to pack music in for good, did Bruno ever imagine things could turn around as they have? “I would’ve probably said ‘Fuck, finally, my god!’” laughs Bruno. “Because there was a whole 10 year period before that where nothing happened, [there was] a lot of pain and heartache.”

“But no, [seriously], my honest reaction would’ve been ‘No way,’” he offers. “Because I make the songs that sound good to me, songs that I think the people will like, too. Of course, I think I’m right in my head; I think when I make songs I like that they’re great. I would hope that other people like them, but I don’t assume they will.”

“But of course,” he concludes with a twinkle, “I think this new record is the best rock album in years, otherwise I wouldn’t have made it.”

The best alt.rock albums of all time, as chosen by Maximo Park's Duncan Lloyd