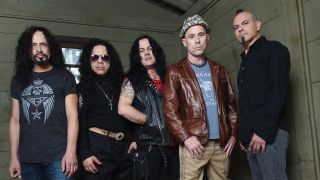 “I got a call from Jonny Z, who was the manager of Metallica at the time, and he said they wanted me to sing with them,” remembers John Bush, ex-Anthrax singer and frontman with US metal veterans Armored Saint. “Do I regret turning that down? What I always tell people is that Armored Saint was developing and we were doing well, and these guys were my buddies, you know? Metallica were doing well, but it wasn’t like it was Metallica in 1987. It was a few years before that. So, I didn’t want to leave my band. I liked them and I still do!”

There are two things that every thrash connoisseur knows about John Bush. Firstly, he could have been the singer in Metallica. Secondly, he has had first-hand experience of Anthrax’s once-inexplicable revolving door vocalist policy. You may also be aware that he recorded voiceovers for Burger King commercials. In truth, however, the most pertinent fact about John Bush is that more than three decades after forming in Los Angeles, California, his first band, Armored Saint, are still a very potent going concern and are heading to the UK for a rare proper tour this March. Beloved of diehard metalheads but still comparatively unknown in the rock mainstream, the band’s career has been somewhat episodic, with at least one seemingly final split along the way. But today they have the wind in their sails. 2015’s Win Hands Down album was widely acclaimed, and confirmed that these lifelong friends have still got plenty of shared chemistry to exploit.

“Oh yeah, our friendship goes all the way back to us being little boys,” John grins. “Gonzo [Sandoval, Armored Saint drummer], Joey [Vera, bassist], myself and Phil [Gonzo’s brother, guitarist] went to the same elementary school. We met each other around the 3rd or 4th grade, when we were around eight or nine. Obviously Gonzo and Phil knew each other because they’re brothers! But that’s when the friendship developed, and I’d say it was a strong friendship through the rest of our teenage years, and it just kept going. Obviously there was a little time when I joined Anthrax that the relationship became a little more distant, but we didn’t have phones back then, so I’d be on tour and looking for a damn pay phone, ha ha!”

Formed in 1982, Armored Saint stood out from the start, not least because the majority of metal bands in their native LA were firmly in the sleazy, Sunset Strip camp, as MTV began to take notice of heavy music’s burgeoning popularity. By the time the band’s debut album, March Of The Saint, emerged in 1984, the thrash movement was noisily underway too, but John Bush and his bandmates’ bluesy and melodic but precise and muscular take on the old-school metal template didn’t fit into that scene either.

“We’ve always been in a kind of limbo state,” John shrugs. “We started in ’82 and we played with all the bands that came out of LA, so that’s Ratt, WASP, Quiet Riot, Steeler, Black ’N Blue, Great White, everybody. They were great shows and those bands were cool and we got along with them. But we sounded a little different from the bulk of the LA bands and that became more obvious as time passed. We always wished we were from England, and I mean that honestly. Our favourite bands were Priest, Motörhead, Sabbath and UFO. When thrash happened, we had some songs that were fast, but we were always more of a bluesy hard rock, heavy metal band, and we’d write slow songs, so that didn’t really fit in with that scene. We did tours with Metallica, and I’m sure we could have done the same with Anthrax and Slayer, but we weren’t in that scene, so people would be like, ‘So, what are they?’ Back in the day it was somewhat frustrating, because we couldn’t connect with a scene, but as time has gone on, I’m happy, because we ended up doing our own thing.”

Despite their undeniable square peg status, Armored Saint retained a sizeable following of heavy metal connoisseurs throughout the 80s, and were approaching the 90s and the recording of their fourth album with a degree of optimism until original guitarist Dave Prichard succumbed to leukaemia and passed away in 1990. As they mourned their friend, John and his fellow Saints made a collective vow to finish working on the songs that Dave had been writing prior to his death. The result was 1991’s Symbol Of Salvation, widely regarded as Armored Saint’s masterpiece, and an album that, with hindsight, suggested the band were better equipped than most to weather the oncoming storm of grunge and nu metal. Unfortunately, the emotional fallout of losing a cherished comrade, coupled with years of hard slog, brought the first chapter of Armored Saint’s story to a premature end.

“I think we probably had these expectations that Symbol… was gonna be bigger than it was,” John remembers today. “But truthfully, even though we received a lot of acclaim on that record, we didn’t get the results that perhaps we’d expected. There was some frustration on the US tour that we did after the album came out. It was one of the most miserable tours I’ve ever done in my life. We were driving through the Rockies with all our luggage and 10 guys in a van. I thought we were going to die every time we hit the road and there were a lot of short fuses in the band. It felt like a big sigh, you know? We’d made Symbol… but we were exhausted, mentally, physically and emotionally. The tour was terrible and then Anthrax came along. It just seemed like the right time to end it.”

John Bush jumped ship to join the New York thrash legends in 1992 and went on to record four well-received studio albums, culminating in 2003’s classic We’ve Come For You All. But Armored Saint was never truly done and dusted, and the strength of its members’ friendship ensured that the band were back in action again when the 21st century dawned, releasing their fifth album, Revelation, in 2000. Unlike many of their earlier peers, the band’s sound was fluid and malleable enough to be deftly upgraded for a new era, and John’s soulful rasp had never sounded better. It would take the band a further decade to make a follow-up, 2010’s La Raza, but with the logistical intricacies of the is-our-singer-in-Anthrax-or-not debacle receding in the rear-view mirror and the universal thumbs-up given to Win Hands Down, the last few years have been among the band’s most successful to date.

Having quit Anthrax after the birth of his children to avoid being away on tour for long periods, John Bush admits that Armored Saint will never return to a full-on touring schedule again, but the chance to attend to some unfinished business in front of an ever-expanding, multi-generational and international audience is too good an opportunity to waste.

“There are still a lot of territories that Armored Saint have never played that I do want to go to,” he says. “We’ll try to make that happen. We just have to find a way to do it so we’re not gone for months at a time, because then I’ll be divorced and a junkie, and that’s not the road we want to go down, ha ha! It worked out perfectly when I left Anthrax, because I’d just had my daughter and it seemed like the right thing to do for my family. The one thing you can’t get back is time. But I do love performing. I love singing. It’s one of the few things in my life I do well!”

It’s hard to imagine that John Bush doesn’t occasionally daydream about how his life might have turned out if he’d accepted Metallica’s offer all those years ago. But in 2017, he could hardly be happier, and Armored Saint have never been more in demand. Sometimes slow and steady wins the race, hands down.

“We’ve always just believed in ourselves. Not to get too spiritual, but the Armored Saint thing is just here. We’re a cool entity!

Armored Saint are on tour this month. Win Hands Down is out now via Metal Blade

What was it about John that caught Metallica’s attention?

“Lars was in love with the way John sang for Armored Saint, and I guess Armored Saint was the one band from the LA area that stood out as not a poser hair band, so he took to John and wanted him to do the job! I liked James, but no one knew his power at the time. He was Metallica’s singer, but they had ideas of going further with a lead singer. I guess James proved everybody wrong. There was a point where James was joking about, and said, ‘Lars is a great front-man! Get him up there!’ Those were good times.”

What did John say when you called?

“He was very, very happy with his established band, and he said to me, ‘Thank you but no thank you’, and I gave the bad news to Metallica. I was also the one to call John for Anthrax. Really, that was the great call. I called him and said, ‘Lightning doesn’t strike twice.’ And that became a reality.

How did you feel about the rejection?

“I feel terrible about the whole thing! I know Joey Vera, but I did crazy things when I was young, and I had less scruples than I have today – I’m a very different person today! I thought they were a great band, and I wanted their great singer!”

Armored Saint: On The March For 30 Years