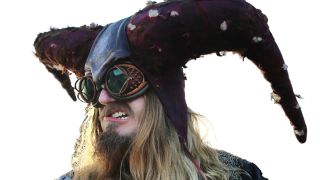 Liberating an authoritarian scene from the church-burning notoriety of its recent past with playful, imaginative artistry, the best output of the era still feels futuristic and fascinating nearly 20 years on, and La Masquerade Infernale is its crowning glory. Simen contributed to three songs as a guest musician and writer, allowing him to view the blossoming band’s creative process as a privileged outsider.

Lengthy stints in Dimmu Borgir and Borknagar followed, and it was seven years before he finally got the chance to front Arcturus for real after founding vocalist Kristoffer ‘Garm’ Rygg left to concentrate on Ulver. However, Simen has an unexpected perspective on those early collaborations with his future bandmates./o:p

“Back in ’97 I saw myself as the Arcturus frontman!” he reveals. “I really did. It didn’t last very long, but Garm was pretty much out of the band, he wasn’t showing any interest. When we started writing The Chaos Path he just wasn’t there. Then he heard the material and wanted back in, but I spent a lot of time with the guys in ‘97, jamming and drinking and smoking. I introduced them to The Nightmare Before Christmas soundtrack! They really got a kick out of that, and I think that shines through on some of the work, it took a direction… I’m not saying it was because of me, but I felt like part of the band in ’97. When I got asked to join in 2003 I said no, but, when they asked me the second time, half a new album was written, and I listened to the demo tapes of what became Sideshow Symphonies, and it was so amazing I couldn’t say no anymore. I had to do it.”/o:p

2005’s Sideshow Symphonies was Simen’s first album as the full-time Arcturus frontman, so surely he must have been more frustrated than anyone when the band split up at the end of that tour?

“No, that was my idea actually!” replies the vocalist with a throaty cackle. “We’d had a lot of personal clashes on the tour, and I said, ‘Guys, we’ve got nothing on our plate for a really long time, maybe it would be good to take a break.’ I always thought we would get back together at some point, we weren’t hating each other, but it was in the cards somehow. So we made the dramatic announcement: ‘This is the last Arcturus gig ever’, and I thought, ‘Ooh, that’s a lie,’” he laughs.

“But it worked for Immortal! Everybody does it. Why the fuck shouldn’t we jump on the ‘We’re splitting up’ bandwagon and see what happens? It felt really natural to take a break, but the break was 10 years, so I guess you can say it really was a break-up.” /o:p

Reconvening five creative artists after a decade apart can be a fraught and pressured experience, especially when those individuals are as disparate and eccentric as ICS Vortex, guitarist Knut, keyboardist Sverd, bassist Skoll and drummer Hellhammer. How hard was it to re-establish those relationships, given that “personal clashes” had been a factor in the band’s dissolution?

“I’m a different person now. We’re all different, not just from everyone else but from each other, and I think that’s a good thing,” ponders the frontman. “We’re all getting older and rounder – not just around the belly but around the edges as well! So there was a lot of – hah! – love in the air. It was so cool to be back together. We started off really informally, having dinner to talk about old times and see if there was any interest in picking up the Arcturus thread again, and everybody was like, ‘Fuck yeah, it would be exciting to see what happens.’

“Then a couple of months later we got together in the rehearsal space and did almost a whole old set, and we were really getting a kick out of playing it. Everyone was like, ‘Yeah, we have to do more of this now.’ Even though everybody was really busy with family life and dayjobs and the not-very-rock’n’roll lifestyle we’re living now. It’s taken so much time, but I’m so glad we found space for it.”/o:p

Like a lot of the mutant strain of Norwegian metal that they pioneered in the mid-late 90s, Arcturus were always an avowedly forward-thinking, diverse outfit. Arcturian spins these impulses into orbit, with the epic heavy metal of Pale rubbed up against the euphoric industrial pop of Demon, the fearless reggae oom-pah fusion in Bane, and classical violin over dubstep rhythms provided by new collaborator Twistex. Did the band take stock of how the musical landscape has changed since they’ve been away?

“I had to Google dubstep!” Simen laughs. “I didn’t know what it was until we started working with this guy. He’s like 20 years old – half our age! – so that’s a whole lot of new input for us.”

Are the band always in agreement about which new sounds to incorporate? Does anyone have a line in the sand about certain musical forms that they refuse to play? “I hate reggae!” Simen announces. “But Knut really loves it so I’m sure it’s in there. If you asked us 10 years ago, there would have been more lines in the sand, but as you progress and grow older you’re more keen to experiment on the unwritten rules of black metal you just don’t care about anymore.”/o:p

Perhaps the most immediately noticeable change is the sleeve design by Costin Chioreanu. Formerly, the band’s releases established a standardised visual formula of space-based photography, but although Costin’s surreal Arcturian painting is totally different from any sleeve they’ve ever had, it’s also a totally fitting visual presentation for the band. Was it always clear that a new approach to graphic design would be needed?

“We probably would have gone in another direction, because the last things we were doing were pretty expensive!” admits Simen. “But I don’t know what would have happened if we hadn’t got Costin. When we got back together he did us some posters and banners, fantastic things that were spot-on from the start, stuff that only someone who listens to Arcturus could do, it blended so well. He’s doing an animated video for us as well, I’m so happy to know that stuff is on its way. I let him pick his favourite song, then give some guidelines about lyrics, but I like to leave it open so people can interpret it their own way.”

When pushed on the subject of lyrics, Simen admits The Arcturian Sign is about “the dark side of addiction: the needle stuff,” Crashland addresses his past problems with MDMA, Angst is an “alcohol song” and Bane is inspired by LSD, but he seems bashful when jokingly asked if it’s a concept album about the band’s shopping list.

“I don’t even know if I should say this!” he confesses. “I definitely don’t want to glorify drugs or anything like that, especially having kids myself. I look at my friends who either died or got really fucked up on this stuff, and when you’re 40 you definitely shouldn’t be like, ‘It’s so cool’ or whatever. But I don’t want to be preachy about it either, I fucking hate that, always did. It works for me, that’s what I want to write about. It’s a main thing from my past; I’m glad I got through that period, but it’s so personal and intense, you’ve got to get it out of your system.”

Clearly, having Arcturus back as his main outlet for expression is a great source of pride and joy for Simen, who frequently laughs self-consciously at his own revealingly sanguine choice of words.

“We just wanna have – hah! – I can’t use the word ‘fun’ but that is what it is! I love being in the studio, all that experience coming together. I’ve listened to this album so many times and I still like listening to it now. When it hits the record store I won’t listen to it anymore, it can be someone else’s baby. But for now it’s ours.”

ARCTURIAN IS RELEASED ON MAY 11 VIA PROPHECY PRODUCTIONS/o:p

Embracing the carnival bizarrely, Arcturus jolted Norwegian black metal off its rocker with their second album, a tour de force of dizzying theatrical grandeur and arch sinister mischief, mashing past, present and future with flamboyant zeal.

Beautiful dissonant murk, this solitary album by the band that became Virus was a literal one-off, heady with haunting and hypnotic atmospheres, and a roving, Brechtian sensibility that was unusually stripped-down – until the end, when an orchestra goes bonkers.