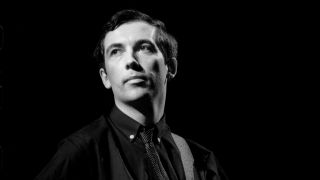 They hated the stuff boys were supposed to like – fast cars and flash guitar solos –  and while their contemporaries screamed about hate and war or bringing down the monarchy, the Buzzcocks were more hormonal rush than civil war. Their songs were about longing, about feeling unloved and unwanted – and, in case you ever thought they were taking themselves too seriously – about wanking yourself raw too.

And at their heart was Pete Shelley: impish, dry-witted and fearless. An anti-guitar hero who started out like everyone: learning Clapton riffs and playing Black Sabbath.

“I was in one band at school,” he told me, “it was the only heavy metal band [I was in] really - and they got me on rhythm guitar because I could work out the songs. This was the early 70s, so it was bands like Black Sabbath, Groundhogs, a bit of Rory Gallagher and Taste, stuff like that."

The first riff he learned to play was Sunshine Of Your Love (“Was I fan of Cream? I liked some of it, I didn't think Clapton was God.”) but his taste ran to the more avant-garde: Can, Neu!, the Residents.

He had tried to teach himself guitar by reading Bert Weedon's legendary tuition aid Play In A Day but “got bored”. He collected Beatles singles from second-hand shops and picked up a series of books called It's Easy To Play The Beatles.

“It was just chord boxes, so I used to play along with me records and learn the Beatles songs,” he said. “Then I learned T. Rex – which was really good, cos that was all your basic 12 bar rock'n'roll licks – and then through David Bowie, I got into the Velvet Underground and stuff like that. I learned just by playing along with records.”

He brought that same do-it-yourself attitude to forming a band, putting on shows and releasing records – and ultimately had a massive influence on the way the business was run.

Shelley and band mate Howard Devoto were inspired to form Buzzcocks after seeing the Sex Pistols play in High Wycombe and their debut gig was as support to the Pistols in Manchester – a gig that the two men had organised and promoted and was one of the pivotal moments in the Manchester punk scene – recreated in Tony Wilson’s biopic 24 Hour Party People and the subject of a book, I Swear I Was There: The Gig That Changed The World.

"I was anti-music," Shelley explained. "99 per cent of music is just showing off. When we first started off, the whole idea was to make the most uncommercial, horrible music we possibly could - hence two-note guitar solos. We thought, 'No-one's going to buy this!'

They did buy it. Hoping to sell 1000 to make back the money they’d borrowed, they sold 16,000 and created a new business model: maybe bands didn’t need to wait for CBS or EMI to give them a deal. Maybe they could just do it themselves. With the support of the music press and DJs like John Peel, they had kick-started what would become the indie scene.

Shelley hadn’t expected that. “We wanted to be as ridiculous and outrageous as possible,” he said. “But then people loved it. And there we were – trapped.”

But you must have enjoyed it? "Well, yeah,” he said, “but I'm always game for a laugh. The people who enjoyed our music turned out to be really nice people that we had a lot in common with. So it was excellent, but it was quite unexpected.

“In those days, to be in a band, you had to be a musician. You had to have studied for years and know loads of people in the music industry. But we just sneaked in and no-one kicked us out – so we became musicians by default really.

“To do a two note guitar solo, especially at the time, was to cock a snook at the excess that had become guitar playing. Guitar is a wonderful instrument to play, but you can learn the basics of it in an afternoon. And after you've learned the basics, well, I never saw much point in perfection.

“You've got to realise what it was like in '75/76. Guitarists were looked at as being like beings from another planet. It was all to do with how many notes you could play and how fast and people would argue about who was the better guitarist according to how many notes they played in their solo.

“I’m not sure that's changed too much,” I said.

“Well, in that case I haven't done my job properly.”

While other punk bands were dressed by Vivienne Westwood or posed like male models, Buzzcocks looked like ordinary kids – the boys you went to school with, piss-taking little fuckers who liked a laugh and were rubbish around girls. The Buzzcocks underlined the fact that you didn’t have to be a Golden God to be in a band. You could be a bit crap – just another oik in shit clothes with a rubbish guitar – as long as you had something to say.

Even their punk rivals were impressed by their fearlessness. “Gawd bless Pete Shelley and the Buzzcocks,” The Damned’s Captain Sensible told me once. “Two note guitar solos. A breath of fresh air. I saw them turn up for the Punk Festival at the 100 Club and their guitars were in plastic bags, like Safeway bags.

“They were Top 20 guitars, the cheapest guitars you could get, like Woolworths guitars or something, and some of them had like four strings and they could hardly tune them up. They just went onstage and did their thing and it was so gloriously inept and so different from what Clapton and these other people were doing with their note-perfect boring blues tunes.

"I mean, people say the guy's got soul, but he just looks so bored onstage. Meanwhile, the Buzzcocks were going for it, with four-string guitars, giving it loads of passion. Couldn't play a note but it was brilliant. The Punk Festival was the moment that I thought we were all on to something and it was going to wipe away everything, that all the boring rubbish was over…”

Guitarist Vini Reilly – later of Durutti Column – was hanging around with local gangsters until he saw the Buzzcocks. “I saw the Buzzcocks in a little pub in Manchester getting things thrown at them by these long-haired guys who just didn't understand what they were doing,” he said. “I thought they were fantastic and I suddenly realised this was something that this was something that was going to allow me to do my music and not give a toss, basically.

“Just the fact that they didn't care and they were trying things that were different. If some critic from The Guardian had been there he would've said that they were avant garde and all the rest of it….”

(I told Pete this: Vini Reilly says you changed his life. He laughed: ”I get the blame for lots of things.”)

Tony Wilson’s So It Goes show caught the Buzzcocks at this point, playing What Do I Get? at the Electric Circus, with fellow songwriter Steve Diggle mugging for the camera and Pete an oasis of calm, playing a broken Star Way guitar and introducing a stupidly simple guitar solo with the words, “Tricky guitar solo!” before playing it with a droll smile.

“Some people called it a 'sawn-off guitar’,” said Pete. “It wasn't sawn-off. One day we rehearsing and it fell on the floor and the body just split – but it still worked so I carried on playing with it.

The year before we spoke the guitar had been in an exhibition. “Insured for £10,000!” he laughed. “But unfortunately nobody nicked it, so I got it back.

"In those days, especially when I was at school, you used to find that the person that fancied themselves as a lead guitarist, they'd save up and buy a Fender guitar and we were all supposed to worship them because they had that. When in fact you could just get any guitar.

“I got one from Woolworths, the Audition guitar, cost about £20 or something like that. And it all meant you could smash them up.”

Shelley's ear for melody, a great pop hook and a smart lyric, however, soon set them apart from their contemporaries. Spiral Scratch was followed by the outrageous oanist anthem Orgasm Addict. What Do I Get? breached the top 40. Less than two years after Spiral Scratch they were part-time popstars: Ever Fallen in Love (With Someone You Shouldn't've) went to number 12 in the UK singles chart in 1978. By 1979, they were on the cover of Smash Hits.

When you asked him about his songwriting, he played it down, like it was just one of the tricks of the trade. ”Melody is an aid to memory," he said. "Once you've learned a tune, then you don't need to know what the notes are, you know where you are in it by the melody. It's like rhyme – those are just ways of helping your memory. Without melody, it's a bit difficult to know where you are in a way, but once you know the first couple of lines, the rest follows naturally."

Buzzcocks split in 1981, after a string of classic singles and three albums. Shelley embarked on a solo career, with his 1981 new wave single Homosapien banned by the BBC for its references to gay sex. Solo tracks cropped up in the soundtracks for John Hughes movies.

He reformed the Buzzcocks in 1989 and the band released another six albums and toured the world, often as support to a younger generation of punk bands. The Buzzcocks’ style had become part of the punk scene – a new way of doing things that was much imitated.

Shelley's singing style was far less aggressive and masculine than the pub and blues rockers that had come before him and his lyrics were often romantic and funny. Most obviously, Derry’s The Undertones followed in their footsteps and arguably the Buzzcocks kicked off the ‘punk pathetique’ style – a style of punk that was often dafter and less macho than its testosterone-fuelled rivals (think Toy Dolls, Splodgenessabounds etc).

By the mid-80s, a new breed of indie bands like The Pastels, Shop Assistants and Soup Dragons took their cue from the Buzzcocks. It’s hard to imagine the existence of Green Day without them.

When it came to writing words, he said, he just tried to be himself: "If you're writing about how it feels to be you, then there's a lot more humour involved. I'd rather be jokey than funny.” We’d been talking about the new wave of American punk bands in the 90s. “There's a lot of so-called punk bands,” he said, “and they don't have any sense of fun.”