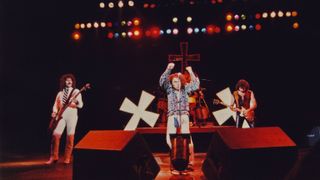 “People always set Mob Rules up against its predecessor, Heaven And Hell, which is regarded as a classic. And, for most, Mob Rules suffers by comparison to what went before. But to me it’s the latter that’s the better record. Part of the reason is that I actually got it first, and then discovered Heaven And Hell afterwards. But there’s more to it than just that.

“With Mob Rules, the band themselves really found their feet. It benefited from the fact that they had toured a lot on Heaven And Hell, and gotten to know each other so much better. And having Vinnie Appice replace Bill Ward on drums after the recording of the Heaven And Hell album also made a big difference. Don’t get me wrong, Bill’s a great drummer, but he’s more a jazzy type performer, whereas Vinnie has a straight-ahead hard rock approach, which suited Black Sabbath far more. It helped to bring out the best in Ronnie Dio’s vocals.

“I also think you have to give a lot of credit to Tony Iommi’s guitar playing on this record. My guess is that, by this time, he’d heard Randy Rhoads playing on Ozzy’s stuff, and raised his game accordingly. Listen to the double-tracking and the lead guitar parts – he’s really going for it, as if trying to prove a point.

“There are certainly more riffs on Mob Rules compared to what happened on Heaven And Hell. Check out the riff at the start of Falling Off The Edge Of The World – that’s brilliant.

“Martin Birch’s production is also spot on – as usual. The feel of the album is raw, live and direct, which was exactly right for the time. If you consider that we were on the verge of a major breakthrough in the way heavy metal was to be defined, with bands like Iron Maiden making their impact and Metallica about to get going, then Mob Rules is exactly what Sabbath should have been doing at this point. Listen to it now; it stands up really well up against anything you hear today. The vibe of the record was so well-balanced.

“For me, there are three stand-out songs on Mob Rules: Turn Up The Night, which had the same feel as Neon Knights from Heaven And Hell; Falling Off The Edge Of The World; and Sign Of The Southern Cross – all Sabbath classics.

“Mob Rules is the best album Black Sabbath made with Ronnie Dio, ahead of both Heaven And Hall and Dehumanizer. It set a standard that Dio himself tried to emulate when he left Sabbath and made the Holy Diver record – which in a way was the natural successor to Mob Rules.

“If you’re one of those who’s dismissed this as a poor follow-up to Heaven And Hell, listen again.”