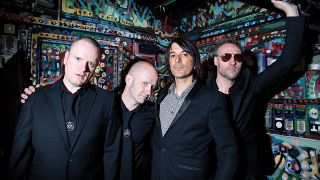 Led by their charismatic and colourful singer/guitarist Sel Balamir, Amplifier have been a fascinating experimental presence on the UK rock scene for two decades now. After acclaimed albums including The Octopus, Echo Street and 2014’s Mystoria, they’re back with more hefty literate psych anthems on their sixth album, Trippin’ With Doctor Faustus. Balamir tells us about this rock’n’roll fable – recorded on two-inch tape for his own label Rockosmos – and posting merch to the far ends of the earth.

Why did you record the new album to tape?

One of our old buddies, Steve Lloyd, died from cancer. He used to co-own [key Manchester venue] The Roadhouse, and he left us an old tape machine, this Otari MTR-90. It didn’t work, so we fixed it up and decided to record on it. I’ll never go back to using a computer – it’s not rock’n’roll, it’s just file management.

Was Goethe an inspiration for your Faustian tale?

What, the Chas & Dave tune?

[Laughs] Just kidding. No. I’ve never read Goethe’s Faust. Only the song Silvio is really about the Faustian pact. The others are more observations. Opener Rainbow Machine is really upbeat, positive and idealistic, and over the course of the record you end up with Old Blue Eyes and it’s like you’re going to hell. There comes a point where youthful idealism becomes tempered by a few too many experiences.

Sounds heavy. But there’s a Gong-like humour and warmth to Amplifier.

Definitely. And that’s really important to us. When we first started, in the nineties, we wanted to be taken seriously, to be acknowledged for making art. As you get older, you realise that music’s about celebrating being alive, about having fun. I hope that’s what comes through.

It seems like the scene has changed around you, rather than vice versa.

We’re kind of beyond space and time. All our albums sound different, but we play the same kind of music with the same spirit, and that hasn’t changed. That’s what art should be. Each album is about the band’s circumstances at the time.

You sound really energised by your label, Rockosmos.

It’s really inspiring working with other people. We’ve released records by great new bands Thumpermonkey and Awooga. Amplifier’s got a mailing list of fifteen thousand people, and we know the process inside out. We can help.

Twenty years in, are you happy with Amplifier’s cult status?

I don’t think about it. We just play the music we’re drawn to, music with that feeling of unconstrained freedom. It took a long time to build up that mailing list. I send all our merch out myself, I know where it all goes – everywhere from Malaysia to the Falkland Islands‚…

[Laughs] But that’s what’s great about rock fans. If you’re into rock music, at the end of your life you’ll have a record collection. It’s a statement of your personality. Looking through someone’s vinyl will tell me a lot about that person in a short time.

Trippin’ With Doctor Faustus is available now via Rockosmos

The top 10 best guitar solos of all time, as chosen by Amplifier's Sel Balamir