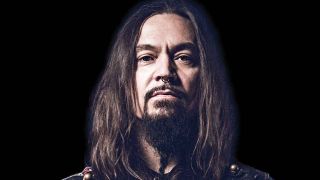 “Getting ill on tour. As a lead singer, you get paranoid about your health. But, whatever you do, you’ll always get sick anyway. There’s nothing you can really do about it. It’s fucking frustrating, especially if you are on tour in the States and the sun is shining, but you’re dying of tour flu inside your bus.”

What’s the best piece of advice you’ve been given?

“‘Shut up and be fashionable.’ I heard this line at a festival in the early 90s. It was said  by some drunken metal brother, who was throwing killer one-liners, making us laugh like hell! He was wandering around the camping area trying to watch people have sex in random tents. He kept asking, “Have you ever been in Turkish prison?” A drunken genius!”

“When we first arrived in the US. A Hummer limo picked us up from the airport. I thought, ‘Wow, so this is how it feels to be in a band!’ But it didn’t last long. The first venue was a shithole in suburbia. They even didn’t have a PA system there. I also lost my voice after the first show. It was a horrible experience.”

“Six months ago. My dad had some health issues. I was sad and really worried about him.”

“I don’t have any personal experience. I’ve seen a lot of people on drugs during the years and there’s no glory in that. I have my own problems already, so I don’t need anything else to fuck up my life even more.”

“We use in-ear monitors when we’re playing live, and they can be very loud. We’ve started shows a couple times where we play but the amps aren’t on. We are blasting out heavy music onstage, and hearing it in our ears, but the audience hears nothing. Doing that in front of a thousand people, you feel so fucking stupid! Ha ha ha!”

2020 is Amorphis’s 30th anniversary, and you’ve been with them for 15 years now. What was the most surprising thing when you first joined the band?

“I’d been following the band since day one, and I thought they were much bigger than they actually were. [Debut album] The Karelian Isthmus was huge for me, so I thought the guys were just huge stars with a worldwide audience. Then I joined them for that first US tour and there were  a hundred people in the audience [per night]. I wasn’t disappointed, just very surprised. In January we co-headlined [London’s Kentish Town Forum] with Dimmu Borgir, so things are much different nowadays!”

“That’s a hard one! I really love Grave and Dismember – 90s Swedish death metal is my cup of tea. I love the slow tempo of the riffs; I don’t find it interesting when bands put a million notes in their songs. Grave, for example, have really groovy and simple riffs and I love it. They’re tuned so low and they just sound so powerful!”

What’s the worst injury you’ve ever had onstage?

“I’ve fallen down a couple of times. Nothing too traumatic. Ha ha ha! It’s happened a couple of times in the States, just when you’re really tired and the stage is slippery. I really hope there isn’t footage on YouTube. I haven’t seen any.”

What’s the craziest party Amorphis has ever had?

“Before I joined the band, they played a show in Russia and then went to the local biker club afterwards. I say ‘club’ - it was a big wooden castle with fireworks! There was a huge party and they’ve told me it was like living in a different world, or a different time.”