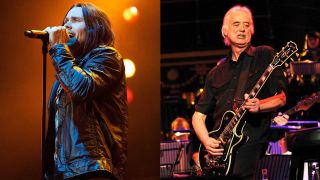 Aside from Robert Plant, there are only a handful of people who can say they’ve sung with the surviving members of Led Zeppelin. Myles Kennedy is one of them.

Kennedy can still remember the exact day he auditioned for Led Zeppelin. It was Friday, June 13, 2008, 24 hours before his band Alter Bridge were due to appear on the main stage at the Download festival.

Alter Bridge were riding high on the on the back of their second album, Blackbird, as close to a full-blown stadium rock record as the 21st century had thrown up so far, and Kennedy was a key part of their a success. An unashamed belter, his to-the-back-row-and-beyond holler was a throwback to the glory days of the 70s and 80s.

That’s probably why Jimmy Page decided to get in touch with him. Zeppelin themselves were in a strange place. Their high-profile reunion show at the end of 2007 had sparked a huge appetite for a tour. The only problem was that Robert Plant point-blank refused to do it. Searching around for a potential surrogate, their eyes settled on Kennedy.

“It was Jason Bonham [son of late Zeppelin drummer John Bonham] who reached out,” says Kennedy today. “I hadn’t talked to him in years, since we did the Rock Star movie together. He called me when we were on tour and said, ‘Jimmy Page, John Paul Jones and I are in London jamming, and we were wondering if you’d be up for coming in?’”

Kennedy thought he was joking, but he wasn’t. And so on that fateful Friday, he found himself walking into a London rehearsal studio to be greeted by Page, Bonham and John Paul Jones. “I was completely freaking out, as you would,” says Kennedy.

Introductions were made, nerves were calmed, gear was plugged in and the quartet began to play. At first they jammed on a few old Zeppelin songs, including Kashmir, The Rain Song and No Quarter, but then they began to ease into material Kennedy had never heard before – nothing more than sketches with the singer scatting over the top, but new material nonetheless. When they finished, Kennedy announced he was going to get a cab to the station to get a train to Birmingham ahead of Download the following day.

“Then Jimmy said, ‘John and I are going to drive you to the train station’,” says Kennedy. “On the drive, Jimmy and John Paul told me what they were considering. It was a new project, it wasn’t going to be Led Zeppelin, and would I be interested in perhaps singing with them? My answer – and this is the dumbest answer of all time – was, ‘Well, yeah, you guys are pretty much the shit. [Embarrassed laugh] I cannot believe I said that.”

There was a second, four-day rehearsal the following September, but Kennedy kept his expectations in check. He knew they were trying out other singers, among them Steven Tyler of Aerosmith, and that Page and Jones were the sort of people to keep their cards close to their chests anyway.

“They were just trying to figure out what was going on with all the Led Zeppelin stuff, and trying to see if the whole situation was appropriate,” says Kennedy. “I heard back from their managers a few months later, and they’d decided not to do it.”

We can only speculate what would have happened had Page, Jones and Bonham hit the road with Kennedy, or even what happened to the new material Kennedy had sang on. While it wouldn’t have been on the same scale as a full-blown Zeppelin reunion, it would have still been one of the biggest events of the decade. For Kennedy, just rehearsing with them was enough.

“Man, it would have been amazing,” he says. “But just to have been in the same room as those guys was something I’d never even dreamed of.”