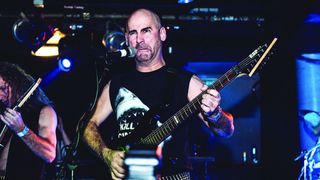 If you’re stuck for a suitably devilish rite to usher in the new year, then thank your inverted five-pointed stars, because thanks to Isengarde Promotions, the Boston Music Room in Tufnell Park, London will be hosting a triumvirate of diverse, extreme metal luminaries on December 31 to ensure that 2019 ends with the only kind of blast that matters.

Headlining the night will be London’s revered and resurrected death metal deviants Akercocke, whose combination of serpentine, progressive battery and wanton odes to to outright devilry are guaranteed to take you across the threshold in suitable state of intoxication.

Also playing are Birmgham’s archdukes of derangement, Lychgate, whose last album, 2018’s The Contagion In Nine Steps, was cinematic in the sense that the angel dust has kicked in, you’ve just realised you’re the only person in the theatre and there’s an organist playing accompaniment who’s not wearing any skin. Featuring Esoteric’s Greg Chandler on vocals, this is a new dimension of avant, warped-doom horror, allowing you to relive the past year’s political landscape with all the requisite dread.

Kicking off the proceedings are Liverpool’s fascist-defenestrating black metallers Dawn Ray’d – one of the most talked about bands to have risen up through the UK underground in recent years, and whose searing, anarchist agit-anthems may stoke a different kind of fire from Akercocke but will set souls ablaze nonetheless.

Tickets for this Devil’s Annus-commemorating event are £21.59 in advance, so snap them up quickly here before time runs out.