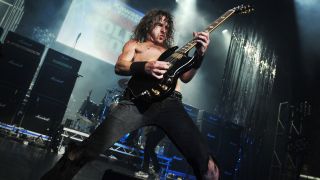 Have you ever climbed up the stage scaffolding and almost fallen?

“There have been a couple of close calls, you know, when there’s thunder and lightning and things get a little slippy. I’ve had to hold on for dear life a good few times. I fell at Sweden Rock once and the guitar got caught between me and a pole – it was the guitar neck that saved me. That was a hairy one.”

Does anyone in Australia actually drink Fosters or watch Neighbours?

“Some of us watch Neighbours but no one in Australia goes near Fosters. Personally, I avoid both! I drink Victoria Bitter and I like to watch car racing, AFL footy and a bit of cricket. And I love Deadliest Catch – the American show about fishing vessels.”

Do you ever get fed up of the vocal minority that label you a glorified AC/DC tribute band?

“Naw, I think it’s funny. Coming from Australia, you’re born to love AC/DC. When you come out of the womb in the hospital, AC/DC is playing. Every band is going to be influenced by that. They’re the best rock band in the world, so it means you’re doing something right. Fist-pumping Aussie rock’n’roll, you can’t beat it.”

What is your most memorable groupie experience?

“Usually I don’t remember much at that point! You get these women, they come in, you fuck ’em and then they’re gone. So you don’t remember too much. When you do, sometimes you wish you didn’t and you wake up thinking, ‘What the fuck have I done?’ Sometimes you wake up and think, ‘She’s really hot, let’s go again!’ But they’re all lovely, ha ha ha!”

What is the worst thing you’ve read about your band?

“I thought it was pretty funny when they called us musicians or talk about our musicianship. We play rock’n’roll, we don’t play music. Music takes talent and some sort of education. We just go out and hit things.”

“Ah, let’s see! Valium’s good… most of ’em are good, to be honest. I like all the drugs. Coffee gets the anxiety going and makes me start bouncing off the walls. Didn’t somebody die from drinking all those energy drinks? If you have enough of that stuff, that’s a cardiac arrest right there. They don’t put that on the label. The legal stuff is worse, ’cos you buy more of it.”

“In Australia we have this white, smooth concrete they use for footpaths. Whenever I’m on that and I’m walking barefoot, I have this stupid inkling to stub my toe on it because I don’t want the surprise of the pain. So intentionally do it because I have a phobia of the surprise when I stub my toe on that particular kind of concrete. That probably sounds weird, right?”

“There was one time somebody brought raw meat and it wasn’t wrapped up or anything. It was all bloody like they’d just gone into a field and hacked it off a cow. His reasoning was we’d love it ’cos Australians like barbecues. He wouldn’t say what meat it was. The neighbour’s dog, cow, giraffe… we’ll never know. There was blood all over my jeans and hands.”

Have you ever been arrested or come close?

“I’ve come close and talked my way out of a few situations. One time we were in the US, having a party in the hotel and cranking Judas Priest and Motörhead. Security turned up a few times – we’d just shut the door and turn it back up. Then some cops came with guns, asking us to turn it down or we’d get arrested. I asked if I could play with one of their guns and they went crazy. In the end, I told them that all the Aussie babes want to get in their pants because of the TV show Cops and that they were all pretty much celebrities back home!”

What’s the worst thing you’ve ever done on a date?

“We don’t really go on dates in Australia, that’s more of an American thing. We just go to the pub, get pissed and ask people if they want to fuck in the toilets, or take ’em home.”

What do you want chiselled on your tombstone?

“It would have to be in very small writing that you have to go really close to my grave to read. And once you get there, it will say: ‘Ease up, you’re standing on me nuts, you cunt!’”

Airbourne tour with Black Stone Cherry from October. Black Dog Barking is out now via Roadrunner