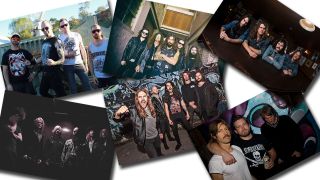 Australian rockers Airbourne live for rock ‘n’ roll. If they’re not in the studio recording or on stage performing (and climbing anything in sight), then they’re down the Cherry Bar in Melbourne watching other Aussie bands. So who better to ask about Down Under rock ‘n’ roll than brothers Joel and Ryan O’Keeffe?

Palace Of The King

Joel: “Palace Of The King are a great up-and-coming rock ‘n’ roll band from Australia; they’re going to be touring over here later in the year. They’ve got a real groove to what they play and they’re all very talented musicians, both individually and as a band. They’re great live too. There’s a bit of Led Zeppelin and Tom Petty in there, full of real swagger and a lot of riffs. In fact, their rhythm guitarist Harry is even called the Riff Doctor.”

Ryan: “These guys have toured in the UK a bit and they’re currently back in Australia cutting a new record with a British producer – I forget his name, though. They’re a real fast-paced rock ‘n’ roll band and their guitarists Tommy and Blanch are both great. They pull really good tones.”

Joel: “Another great Aussie rock band are The Lazys. They hail from Sydney and often when they come over to Melbourne Ryan goes out on the piss with their singer. They’re a great laugh and they’re great bunch of guys, and they’re just a straight-up rock ‘n’ roll band from Australia. They put on a hell of a fucking show too, and they’re definitely worth checking out.”

Ryan: “These guys are a rock ‘n’ roll band from Bendigo in Melbourne. They’ve got sort of an AC/DC sound going on. They’re young country boys and they remind me of us in early days when I see them playing live and giving it their all. They’re really cool guys and great players – definitely one to watch.”

Joel: “The Casanovas have been around for a few years now, but they’re a great Aussie pub rock ‘n’ roll band and they’re coming back with a new album this year. Their guitarist Tommy is great, and the band as a unit are a really solid force, and George their drummer is solid as a rock. They’re looking to give the UK a big hard crack this year and we’d love to have them on the stage with us – just as with all these bands!”

Ryan: “Desecrator are sort of an old-school thrash metal band who sound a bit like early Metallica. They’re good mates of mine and they play all the pubs in Melbourne. My mate Riley heads them up; they’re all fucking great guys and a really cool band. I’m actually wearing one of their t-shirts right now, so I can’t leave them off the list.”

The History Of Australian Metal In 10 Bands