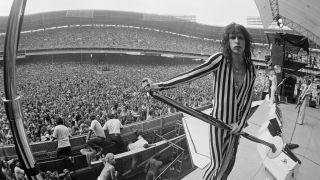 Having formed in 1970, it took Aerosmith several years to shake of the ‘Stones copyists’ tag. Frontman Steven Tyler’s Jagger-esque gob didn’t help, but by 1975’s Toys In The Attic the band from Sunapee, New Hampshire, had carved their own niche and were sounding – and looking – like the band that stadium concerts had been invented for.

Given that in the 70s Tyler and guitarist Joe Perry snorted enough showbiz sherbet to keep the whole Colombian army marching, it’s a wonder they’re still here 35 years on. “It’s totally in the genes, my friend,” Perry said in 2002 by way of explanation. “We’re the worst possible advert for the dangers of drug abuse, because people look at us and say: ‘Okay, you had a great time and made it through, why shouldn’t we try it?’ But it doesn’t work like that.” Except for a three-year blip in the early 80s, Aerosmith – Tyler, Perry, guitarist Brad Whitford, bassist Tom Hamilton and drummer Joey Kramer – have enjoyed a stable line-up. They’ve also undergone various reinventions.

When in 1986 producer Rick Rubin teamed them with hip-hop act Run-DMC for a reworking of Walk This Way, for example, it paved the way for Aerosmith’s comeback album, Permanent Vacation. More recently the ’Smith have collaborated with Eminem. And with the acclaimed album of blues covers, Honkin’ On Bobo, the band retraced their roots.

Aerosmith are a cartoonish institution, and an inherently loveable tour de force who have greatly influenced Van Halen, Guns N’ Roses, Bon Jovi and scores of other hard rock bands. What they’ll do next is anybody’s guess. Nearly five decades into their stellar career, they remain a must-see live act. Tyler is one of the few 50-something rock vocalists whose range and power is still spectacular, and Perry remains the epitome of foot-on-the-monitor cool. “Occasionally I think: ‘Why us? How did we find each other?’” the guitarist has said. Listening to his band’s back catalogue, we’re just glad they did.

Sometime mountaineer Dave Lee Roth claims that nothing gets a mule across a crevasse quicker than Back In The Saddle, the opening song on Rocks. Rocks swaggers and is funky as fuck (witness Last Child and Get The Lead Out). More than that, it’s a big, brash album on which Aerosmith are at their most confident – not least because, prior to its release, the three ’Smith albums that proceeded it werestill in the US chart.

Rats In The Cellar was inspired by the death of the group’s drug dealer, and mid-70s rock doesn’t come any more addictive than this. Rocks also made a young chap called Slash want to learn guitar.View Deal

If Permanent Vacation was Aerosmith’s first drug-free album, Pump was the inspired follow-up that cemented Tyler and Perry’s back- from-the brink-but-horny-as-ever image. Previously they were stars, but now they were legends.

As the band knuckled down at Vancouver’s Little Mountain Studios, commercially attuned songwriters Desmond Child (Bon Jovi) and Jim Vallance (Bryan Adams) chipped in, helping to take Pump to No.3 in the UK. On Love In An Elevator Perry filed his finest riff since Walk This Way, while Janie’s Got A Gun and The Other Side are among the poppiest in the Aerosmith songbook. Pump certainly packs plenty of grit and grease.View Deal

Superior - The Albums That Helped Seal Their Reputation

For Toys read double-entendres. At times, Aerosmith’s third album sounds like the Rolling Stones jamming with the New York Dolls as scripted by Benny Hill, with Tyler delivering Uncle Salty and the truly filthy Big Ten Inch Record with a knowing wink. Fun as those tracks are, though, the real gems on Toys In The Attic are the marimba- bolstered Sweet Emotion, the pre-Run- DMC version of Walk This Way (Perry is reported to have written the music for the song in just five minutes), and the orchestrated ballad You See Me Crying.

As well as being another gem, Toys… was Aerosmith’s first gold-certified album, and resided in the US chart for 128 weeks. It also promoted Aerosmith to the position of playing headline slots over Kiss and ZZ Top. To date, it has sold around six million copies. Go on – add another sale to that figure.View Deal

Originally released as a double album on vinyl, the material on Live! Bootleg was recorded at various US shows between July 1977 and August 1978 in an attempt to gazump a brisk trade in unofficial Aerosmith live recordings.

The band’s then regular studio producer Jack Douglas oversaw the album, and he captured an up-front, warts-an’-all sound that still sounds daisy-fresh even more than a quarter of a century on. With their cover of James Brown’s Mother Popcorn Aerosmith nailed a P-Funk groove long before the Red Hot Chili Peppers did, and there are also sussed takes on The Beatles’ Come Together and Clarence Carter’s I Ain’t Got You. At times you can almost smell the testosterone.View Deal

Out went the drugs, and in came producer Bruce Fairbairn, along with song writing assistance in the shape of Desmond Child, Jim Vallance and Holly Knight. Fairbairn and Child had had a large hand in Bon Jovi’s 1986 colossus Slippery When Wet, and on Permanent Vacation they helped Aerosmith to produce a fine comeback.

Uncharacteristically, the inside cover included a plea to save the whales (the record also featured killer whales Hyak and Fina singing on Heart’s Done Time). Although a tad overwrought in places, …Vacation contains at least two Aerosmith classics: Rag Doll finds Tyler scatting like The Jungle Book’s King Louie; Dude (Looks Like A Lady) (infamously inspired by an encounter with a glammed-up Mötley Crüe), is a song about an amorous would be cross-dresser that rivals Lola by The Kinks.

“The only difference between pink and purple is the grip,” Steven Tyler once said. Chances are he wasn’t talking about the udders of the cow pictured on the cover of this US No.1 album. Power ballad-rich (Amazing, Cryin’, Crazy – all of which starred then-unknown actress Alicia Silverstone in their respective videos), Get A Grip couldn’t quite match Pump, released four years earlier.

Still, anyone who saw Aerosmith perform stand-out track Livin’ On The Edge at the ’94 Grammy Awards was left in no doubt about their ongoing potency. Lenny Kravitz’s guest slot on the album (he co-wrote Line Up) isn’t particularly memorable, but once again, this is good-to-great mid-90s Aerosmith.View Deal

Aerosmith were still packing a vitality that put their golf-playing peers to shame, and the superb flagship single Jaded was the best of the bunch. Sharing production and writing credits with Mark Hudson and Marti Frederikson, Tyler and Perry led their band into the 21st century. Tower Of Power’s brassy stabs on Trip Hoppin’ harked back to the Permanent Vacation era, while Joey Kramer provided a mighty back-beat on the Zeppelin-esque Under My Skin. Less pleasing was Avant Garden.View Deal

Aerosmith, the band’s eponymous 1973 debut, includes the classic Dream On, and is well worth checking out. Ditto their 1974 follow-up, Get Your Wings, recently voted one of the 20 Most Underrated Rock Albums Ever in Classic Rock, and not least for its fine ballad Seasons Of Wither. Draw The Line (1977) and ‘79’s Night In The Ruts are patchier, Joe Perry having left the band (temporarily, it turned out) before the latter album was completed.

Nine Lives, from 1997, meanwhile, is a decent late-period Aerosmith album, packing excellent, if slightly formulaic, singles in the shape of Falling In Love (Is Hard On The Knees), Hole In My Soul and Pink.

If you would prefer to start exploring the band’s music by getting one of the many compilations available, 2001’s O, Yeah! Ultimate Aerosmith Hits has a choice track-listing, and also includes Aerosmith’s version of Theme From Spider Man, plus the previously unreleased bonus tracks Girls Of Summer and Lay It Down.

Finally, 2004’s Honkin’ On Bobo is a raw and gutsy cover-versions album tipping the hat to Willie Dixon, Jimmy Reed, Sonny Boy Williamson and others.

Avoid - The Runt Of The Litter

As regards the band’s state of mind, the title says it all. Drug-fuelled arguments with Tyler had led Perry to leave during the making of the previous Aerosmith album (Night In The Ruts), and Brad Whitford soon followed suit. Here they’re replaced by jobbing guitarists Jimmy Crespo and Rick Dufay.

Lightning Strikes was the first single from the album (Bitch’s Brew would be the second), but both appeared to little applause. In short, this was a turkey of an album that synthesizers and all manner of 80s studio trappings failed to shore-up. Perry and Whitford were soon invited back.View Deal