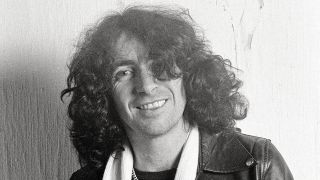 In October 2003, AC/DC played a one-off date at London’s Hammersmith Apollo, or to use its correct title, the Hammersmith Odeon. The last time they’d performed here was November 1980. Back then, this writer was in the cheap seats with a bunch of school friends, peering at the band through a heaving sea of hair and denim, nostrils filled with that memorable rock gig aroma – cigarettes, patchouli oil, beer and armpits.

Scroll forward to 2003 and while some things, mercifully, had changed, the euphoria that greeted Highway To Hell had not. What is it about this song that can make even the most reserved men and women (although it’s usually men) start bellowing ‘Hey Satan! Paid my dues…’ like they’re possessed by an evil spirit and speaking in tongues? It’s all down to the song’s timeless power. Since its release in summer 1979, Highway To Hell has been an entry-level song and album for generations of AC/DC fans. It was the first AC/DC album to have those really big tunes and choruses. And, as great as Back In Black is, without Highway there’d be no Hells Bells, no You Shook Me All Night Long.

For all their bravado at the time, AC/DC knew when to compromise. And Highway To Hell was a brilliant compromise. When they pitched up at London’s Roundhouse Studios that year, they were under orders from Atlantic Records to come up with a hit. They’d already tried – and failed – with producer Eddie Kramer in Miami. Kramer questioned Bon Scott’s ability to sing; Scott claimed Kramer “couldn’t produce a healthy fart”.

In desperation, Atlantic paired them with the relatively unknown Mutt Lange, who’d recently turned 5-7-0-5 by City Boy (the charity shop 10cc) and Rat Trap by Boomtown Rats into hits. Both songs demonstrated Mutt’s uncanny gift for panning commercial gold from an unlikely source, which is precisely what he’d do with AC/DC. From the title track’s opening riff – a cheeky steal from Free’s All Right Now – to Bon Scott’s strangulated howl on Night Prowler, this is AC/DC doing what they do best, while Mutt works his voodoo magic.

The first thing he did was really tune their guitars. The second was to make sure everything, be it Malcolm Young’s metronomic right hand or Phil Rudd’s gunshot snare, could be heard properly. Everything here is super-tight and tweaked to perfection. “He was meticulous,” marvelled Angus Young. “Even Bon was impressed with how he could get his voice to sound.”

But instead of diminishing AC/DC’s power, Mutt’s perfectionism had the reverse effect. It made everything sound more brutal. In fact, listening to Highway To Hell is like being run over by a state-of-the-art tank.

The producer’s final trick was to crank up those backing vocals. AC/DC’s old production duo, Vanda & Young, had tried something similar on the 1978 single Rock’n’Roll Damnation. Similar, but not as big. Mutt’s backing vocal choir transformed the choruses to Girl’s Got Rhythm and the bumping, grinding Walk All Over You into terrace chants.

What Mutt does on Highway To Hell, then, is locate AC/DC’s inner pop group – after all, they’d been weaned on such hitmakers as Chuck Berry, the Stones and The Who – but without sacrificing their souls in the process. He does it on the title track and again on the single Touch Too Much, a gnarly sex anthem with an earworm of a chorus.

Touch Too Much contains both a textbook leering Bon Scott lyric (‘She wanted it hard/Wanted it fast/She liked it done medium rare’) and one of his silliest – ‘She had the face of an angel/Smilin’ with sin/The body of Venus with arms.’ As Spinal Tap’s David St Hubbins once said: “It’s such a fine line…” Scott sometimes overstepped it by slipping into crass toilet-wall poetry, but ‘Venus with arms’ never grows old.

If short on inspiration, Scott usually falls back on singing about the rapturous power of sex or rock’n’roll. Or both, in the case of Get It Hot, side two’s amiable filler, which condenses the singer’s life philosophy into two minutes and 35 seconds. ‘Nobody’s playing Manilow’ on Bon’s radio as he’s ‘moving down the motorway’ with ‘a whole lotta booze’ and ‘a sweet little number’. He sounds like the happiest man alive, which seems awfully sad, considering he’d be dead less than a year later.

Although their cartoon shtick and seaside postcard humour dominate, AC/DC never let you forget they have a mean streak. Beating Around The Bush allows Angus to indulge in some manic guitar heroics, while Scott’s angry, stuttered vocal is a classic ‘woman done me wrong’ rant.

Similarly, on If You Want Blood (You’ve Got It), the best song on Highway To Hell nobody usually mentions, he sounds truly vitriolic, screaming about ‘the shit that they toss to you’ – who’s tossing this shit? We never find out – over a riff so spine‑tingling, AC/DC recycled it a year later on Shoot To Thrill. When the band played this song at the 2003 Hammersmith show, Brian Johnson couldn’t muster the same venom or conviction. There are some AC/DC songs that are just Bon’s, and this is one of them.

AC/DC albums have always traditionally included a slow blues (see: Ride On, The Jack, etc), and Highway To Hell is no exception. But Night Prowler, with its queasy lyric about a stalker who murders women in their beds, always did seem a bit charmless, even in 1979.

Then, after the night crawler has done his worst and the song grinds to a halt, a giggly Bon mutters, ‘Shazbot, nanu nanu’, actor Robin Williams’s catchphrase in the 70s TV comedy Mork & Mindy. It’s a nice touch.

Scott’s last words perfectly sum up both Highway To Hell and AC/DC. As supported by his grinning face looming out of the side of the album cover while everyone else tries to look satanic, Bon’s message is always: never take any of this too seriously. Listening again now, you realise how right he was. But like the song says, Bon Scott ‘paid his dues’. It’s just a crying shame he never made it to Highway To Hell’s mythical ‘promised land’.