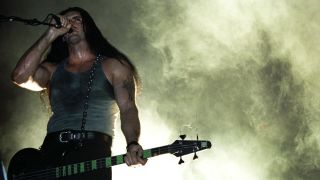 “My average week has no real structure, it’s like feast or famine. When we’re preparing to release an album, that’s when the shit hits the fan. I like to oversee the whole artistic process, and you’d be surprised how much time that actually takes.

“When I worked for the City – I was with the New York City Department Of Parks And Recreations – I didn’t realise how lucky I was. I did just eight hours each day. But when you’re in a band it’s like owning your own business, because you’re never really off the clock.

“Much of my recent time’s been taken up by funerals – five in the past couple of weeks. As you get older you tend to lose more people. That’s unpleasant, but I’m now 41 years old and come from a large family and have a lot of friends.

“These days I’m a late riser. When I was a park maintenance worker my hours were 6am till 2pm. Everybody used to tell me that was great because it meant I had the whole of the rest of the day to myself, but it wasn’t like that. Like anyone else I need eight hours of sleep, so after my evening meal that was it for me, I’d be in bed by eight o’clock at night.

“When the band were playing shows, there were times when I didn’t sleep for days on end. That was part of the reason why I left the job; falling asleep at the wheel of a garbage truck’s not exactly conducive to the welfare of the public.

“Since those days my schedule has completely polarised. I live vampire hours: I get up at four in the afternoon and go to sleep at eight in the morning. I miss the sun. Living in darkness all the time isn’t too good for self-motivation.

“The other side of the coin is that I like to go out with friends in the evening. I take a shower, shit and a shave, I’m out of the house by six and I can hang out all night. By eleven o’clock it’s usually time for my friends to go home to their wives or girlfriends, but I’m just starting to get going. That can be a little strange.

“I wish that I was one of those lucky guys that didn’t have to work out, but I do. I try to exercise six times a week – three times with weights and another three times either jogging or doing something aerobic. Forty-five minutes a day isn’t really a big deal, right? Cleaning my floor of the house – I live with my mother and my sister – is another chore, but recently I’ve hired somebody to come in and do that for me. I seem to spend a lot of time here, because I’m either on the phone doing interviews or working on the computer, so I often find myself making a good excuse to go outside for some fresh air.

“I often haunt my local neighbourhood hardware store. I’m a big fan of tools, plumbing and wiring, and each Friday I buy myself a present; next one might be an exotic saw, some welding supplies or a cordless drill. My next DIY job is probably some gardening work. I just bought a prototype Harley Davidson motorcycle, but I don’t have a driveway so I have to pave the front yard.

“My car is a modified 1985 Grand Prix Pontiac, with raised-up tyres, no mufflers, and with a PA system so I can yell at people. It’s painted black with yellow coffin stripes – the ultimate offence mechanism.

“Type O Negative don’t rehearse unless we absolutely have to. I’m a firm believer in setting aside too little time for these things rather than too much, because idle hands are, of course, the work of Satan. And, boy, does she [Satan] love me.

“I read books to relax; mainly factual stuff, like science. I’m very interested in things like quantum physics, organic chemistry, civil engineering and architecture. I try not to watch too much TV because it turns you into a slob. I like to spend time in cultural activities, checking out museums and botanical gardens. But, given my lifestyle, that can be difficult. If I force myself to get up early I can slip into a museum at 3.30pm and get in a half hour before they close.

“I love to eat… Italian, Chinese or steak. I can cook, but it’s quite boring and lonely to go food shopping. I have four cats and I’m far more likely to go shopping for them than for me. I don’t enjoy preparing a meal and having to clean up afterwards, so I’d rather order something in or go out to eat. I also love the company of females, of course. If I had a date I’d maybe try to combine all those activities. I’d take her to a museum, then get something to eat with her, then maybe come back here and watch a movie together… whatever else happens, happens.

“Right now I’m keeping my options open. I’m not getting any younger. I’m looking for one person and, ultimately, the American dream. Of a wife, house and 2.4 children. Maybe I’ll get one of those Russian brides – or see how much they charge for a dozen.

“My ultimate goal is still to move out of New York City, but living with my mother and sister makes that difficult. So does the band all coming from either Brooklyn or Staten Island.

“I say in my interviews that each album will be my last. The truth is, I’ve made some bad mistakes with money. Had I been financially independent, maybe I’d have stopped all of this by now. Who knows, one day I might go back to school to study civil engineering, graphic design or architecture, but my current plan is to stick with the band for as long as possible.”

For more on Type O Negative’s Peter Steele, then click on the link below.

The Pitch-Black Wit of the late Peter Steele