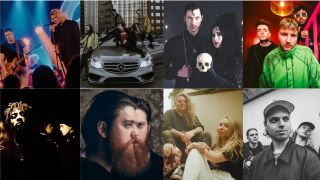 Download Festival has made its name over the years for bringing together the biggest names in rock and metal, and stuffing them into an enviable line-up which takes place over three days and four stages.

But it's not just the big bands Download provides a platform for. Upcoming bands from every corner of the underground are given a chance to win over crowds on the festivals smaller stages over the course of the weekend.

Musically and lyrically, confrontation is the name of Lotus Eater’s game. Though still in their early stages, this tech-metal quartet have got hella lofty ambitions.

It’s fair to say Lotus Eater’s bleak and filthy cacophony is some of the nastiest tech metal Hammer has heard in a long time. Recently, they became the first heavy UK band to be signed by California-based label Hopeless, the home of massive names like Avenged Sevenfold and All Time Low over the years. It’s a huge coup for an aggressive young band, hewn from the mean, grey streets of Scotland’s biggest city.

Don’t bet against them.

Punk rock is great. Grunge is great. When you combine the two, a la Gloucester’s Milk Teeth, the result is even better. Dirgy but upbeat, and so bloody catchy, this is ultimate festival music.

Currently joined by Nervus' Em Foster in the line-up, and with a self-titled new album poised to drop – "a body of work that has been in the making for the best part of three years" – this year signals an important new chapter in the band's trajectory.

Learn the words to some of the songs now, because they’re the sort of live band that just make you want to grab a beer and sing along.

On their new album A War On Everything, these Canadians are assuredly slick and anthemic, but they're capable of a proper rock show; the kind that tantalisingly threatens to fall off the rails without ever actually doing so.

Frontman Brett Emmons, sweet and softly spoken offstage, has a tendency to hurl himself across the stage like a young Axl Rose crossbred with Kurt Cobain. As well as a predilection for good, old-fashioned rock’n’roll, TGS also take cues from Bruce Springsteen's expansive storytelling in their cinematic tales of adventures and teenaged misbehaviours.

This is the kind of shit that ought to be paired with the stages and clientele currently monopolised by the Coldplays of this world.

Twin Temple – husband-and-wife duo Alexandra and Zachary James – are about as far away from death, black and thrash metal as you could reasonably get, but their debut LP, Twin Temple (Bring You Their Signature Sound... Satanic Doo-Wop), is arguably more perverse than the stock Christ-baiting clichés that their distant denim’n’spikes cousins might be peddling.

Theirs is a sleek and sultry sound that might’ve sold its soul to the devil but owes its musical eye teeth to doo-wop golden oldies and 60s rock’n’roll, dispensing with tales of doe-eyed teen love (unless you count ‘let’s hang together in unholy matrimony’…) for songs of sex, sacrifice and self-empowerment. Essential viewing.

Liverpool’s Loathe have made an explosive impression on hearts and minds across the UK with a multitude of multimedia live dates and festival sets. Their amalgam of hefty, downtuned riffs, experimental electronics and lacerating screams have already endeared them to a growing, loyal crowd.

Their latest album, I Let It In And It Took Everything, has, according to Metal Hammer, "put Loathe on the map as one of the most exciting bands to emerge from the British underground in a long time."

What a cracking time to be alive for hardcore fans. Right now, the scene is overflowing with inspiring, boundary-pushing bands and we can add Higher Power to its swollen ranks. With a diverse sound that combines 80s metal influences, lush 90s alt and Alice In Chains sludge, doused in snotty Suicidal Tendencies’ attitude, they’re yet another example of a band who are putting their own stamp on the genre.

An eruption of technical perfection to delight fans of fret-melting dexterity and post-djent atmospherics, Polyphia's sound covers a lot of musical ground while never forgetting to add big tunes to its pinpoint barrage.

Three albums into their career, the momentum around this band is starting to pick up speed. If you're a fan of tech metal and haven't caught these guys yet, now is the time to let them blow your mind.

Something rather intriguing here… If the Beastie Boys collaborated with The White Stripes and chucked a few Stevie Ray Vaughan licks in for good measure, it might have sounded something a little like this.

Chunky blues rock and hip-hop sensibilities complete with identical Amish beards, Brit duo Cellar Door Moon Crow stand out visually and have the gutsy, jutting tunes to match. Warning: their set will contain the kind of hooks that'll stick to the inside of your head like glue (in a good way).