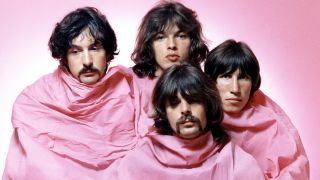 Music made with the sounds of frying bacon and dripping taps, gigs with their roadies dressed as gorillas… But without Floyd’s lunatic phase there’d have been no Dark Side Of The Moon.

When Pink Floyd played at London’s Royal College Of Art in December 1967, Syd Barrett’s childhood friend David Gilmour was in the audience. By the following March when Floyd played Covent Garden’s Middle Earth club it would be Barrett in the audience, ejected from the band and watching Gilmour on stage in his place.

By this point the band’s patience for their frontman’s erratic behaviour had worn thin, and Gilmour was brought in to shore up Barrett’s increasingly distracted performances. By early ’68, Barrett was gone for good. But without their principal songwriter, Pink Floyd would have to reinvent themselves. This period of adjustment led directly to 1969’s Ummagumma and 1970’s Atom Heart Mother, two of their most avant-garde albums, as well as to some of the most outrageous live performances of their career.

In summer 1968, Pink Floyd’s new line-up completed A Saucerful Of Secrets. It was the last Floyd album to include a Barrett composition, the achingly poignant Jugband Blues. Roger Waters took over most of the songwriting, and order slowly emerged from chaos. Beneath the 12-minute title track’s swathes of experimental noise was a well-constructed symphonic arrangement, far removed from Floyd’s earlier lysergic improvisations. Barrett would later rue the band’s approach as too closely related to Waters, Mason and Wright’s training as architects (“Unexciting people, I’d have thought”), yet it pointed the way for much of what was to come. Floyd’s ’69 soundtrack for the film More proved again that they could function without Barrett, with the Gilmour-fronted The Nile Song showing off their heavier side.

“David brought new strengths to the band,” Nick Mason wrote in his memoir Inside Out. “Already an able guitarist, his singing voice was strong and distinctive. He was as interested as the rest of us in experimenting with new sounds and effects, but alongside his inventiveness he also added a more thoughtful, structured approach, with the patience to develop a musical idea to its full potential. He also looked good.”

Gilmour’s hippie-handsome frame was front and centre on the cover of 1969’s double album Ummagumma. Its first two vinyl sides comprised live versions of Astronomy Domine, Careful With That Axe, Eugene, Set The Controls For The Heart Of The Sun and A Saucerful of Secrets recorded at two shows earlier in the year. In a review of one of the gigs, at Birmingham’s Mothers club, DJ John Peel compared Floyd’s performance to “dying galaxies lost in sheer corridors of time and space”.

For the second disc the band and producer Norman Smith divided up the two sides of vinyl between the four members; they would write one song, with Waters writing two. “It was just desperation, really, trying to think of something to do,” Gilmour said later. “I’d never written anything before, I just went into a studio and started waffling about, tacking bits and pieces together.”

Gilmour’s echoing, folky three-parter The Narrow Way contained many of the elements he would bring to the Floyd sound: assured acoustic guitar; an ability to balance non-linear guitar lines with the more conventional language of rock; and, of course, that distinctive voice. Rick Wright offered a four-part classical suite, Sysyphus, Waters his enduring bucolic Cambridge paean Grantchester Meadows and the tape-experiment art piece Several Species Of Small Furry Animals Gathered Together In A Cave And Grooving With A Pict (our first encounter with the Scottish accent he later used on The Wall). Nick Mason’s exciting drum/tape loop trip The Grand Vizier’s Garden Party closed the album.

Released on October 25, 1969 Ummagumma hit the Top 5 in the UK the following month.

Sections from these pieces had formed part of the band’s highly ambitious live set performed throughout 1969. In March and April, Floyd amassed several previous songs, renamed them and worked them up alongside some brand new material into a piece known collectively as The Massed Gadgets Of The Auximines, a suite split into two parts: The Man and The Journey.

With its ‘a day in the life’ narrative, The Man opened with Daybreak Pt. I (soon to become Ummagumma’s Grantchester Meadows). For percussive piece Work, Wright sawed and hammered wood to create a table, upon which the group were served tea while tuning an AM radio, Wish You Were Here-style. Sex was intimated by the climactic drums of Doing It! (an extract of The Grand Vizier) while Sleep and Nightmare drew on Quicksilver and Cymbaline from the More soundtrack.

The Journey was more mythical: Beset By Creatures Of The Deep was Careful With That Axe, Eugene; The Pink Jungle was a return to Piper At The Gates Of Dawn’s Pow R. Toc H., and Behold The Temple Of Light would re-emerge as the third part of Gilmour’s The Narrow Way on Ummagumma.

Pink Floyd premiered The Massed Gadgets at London’s Royal Festival Hall in April 1969; the promotional posters promising ‘More furious Madness from Pink Floyd’, and tantalising with talk of ‘The Azimuth Co-ordinator’, a box with two joysticks attached, which allowed Rick Wright to pan the band’s PA feed in any direction across the venue’s quadrophonic speaker system.

By the final UK date, at the Royal Albert Hall in June – fittingly dubbed The Final Lunacy – the concept had spawned more elements of performance art. One of their roadies stalked the stage dressed as a gorilla, and Mason later recalled how a friend of the band, Peter Dockley, “created a monster costume involving a gas mask and some enormous genitalia rigged up with a reservoir to enable him to urinate on the front row of the audience”.

At the climax, the band’s producer Norman Smith emerged on a wheeled podium to conduct a choir and the Royal Philharmonic Orchestra for A Saucerful Of Secrets, renamed The End Of The Beginning. Wright played the Albert Hall’s revered pipe organ, and the whole thing concluded with a pair of cannons firing, 1812 Overture-style, and pink smoke engulfing the venue.

The live shows were all well and good, but EMI wanted another album. Gilmour had a developed a riff he called a Theme From An Imaginary Western, which would form the bones of Father’s Shout, a monolithic six-part, 24-minute suite which would be the main motif for their next album, Atom Heart Mother. Its working title was Epic, and it’s reflective of some of the later reviews that when Floyd debuted it at the 1970 Bath Festival Of Blues And Progressive Music, they did so with title The Amazing Pudding.

Floyd worked on this after returning frazzled from a period in Rome working on the soundtrack to director Michelangelo Antonioni’s film Zabriskie Point. They eventually handed over the Atom Heart Mother suite to Scottish avant-garde musician Ron Geesin, who’d previously collaborated with Waters on his experimental film The Body. Geesin developed and orchestrated the piece for brass and choir, using members of the EMI Pops Orchestra, and the John Aldiss Choir. Aldiss, a renowned choir master, conducted.

The Atom Heart Mother suite represented the band’s interest and growing facility for longer-form, thematic pieces. Certain musical tropes showed up here which would form part of Floyd’s signature sound: Gilmour’s beautiful, floating slide guitar in on the Breast Milky section would recur on The Great Gig In The Sky; the ominous, repetitive soprano and choir on Mother Fore could be from The Wall or Dark Side Of The Moon. The two-chord progression in Funky Dung reappeared often in their catalogue, from Breathe (In The Air) and Any Colour You Like to Shine On You Crazy Diamond Part II. Meanwhile, Wright’s soulful organ and Gilmour’s gutsy blues guitar became a trademark – on Money and throughout Animals.

On the album’s second side, Waters’s melancholy folk song If was delivered with a fragile, etiolated vocal. He referred to insanity, to ‘the space between friends’, and this introspective side would be brought fully to bear in the Waters era, from Dark Side to The Wall to The Final Cut.

Rick Wright’s thoughtful and underrated Summer ’68 is about something down to earth, as he tries – figuratively – to get inside the head of a groupie. Organised mainly by Nick Mason, Alan’s Psychedelic Breakfast is a piece of tape/sound-effect experimentation with sizzling bacon and dripping taps that still points to the band’s skill with tape and sound effects, which would reap dividends later on Dark Side’s Time and Money. Gilmour’s pastoral acoustic tune Fat Old Sun marked Gilmour’s development into a songwriting force to be reckoned with. But try telling him that.

“God, it’s shit,” he said of Atom Heart Mother later. “Possibly our lowest point artistically. It sounds like we didn’t have any idea between us. But we became much more prolific after it.”

Mason, too, been disparaging. “What we ended up doing, in a way, was going down some cul-de-sacs,” said the drummer. “It was really [next album] Meddle that was the next stepping stone, and the way forward towards Dark Side Of The Moon.”

Yet for all the scorn the runtish Atom Heart Mother has received, it helped them get there. Thanks to that record Floyd entered the next decade with a UK No.1 album to their name, which helped make them solvent and able to follow the groundbreaking visions that were then just smoke on the horizon. They left the 60s without their founder member, but the invention foisted on them by necessity saw them raise their game and lay the foundations for the landmark albums to come.