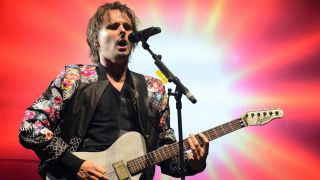 “You can buy a mobile phone which can fire up to four bullets. Handy to have if you’re a psycho.” 2001

“Our DNA was mixed with a species from outer space and apes; we’re a mixture of the two.” 2003

“I’ll go and buy an island and live underwater in a re-breather with Kleenex boxes on my feet.” 2003

“The concept of democracy is a fucking joke. Rock’s supposed to shake things up and say, ‘Fuck that, this is shit, man! Let’s burn down the Houses of Parliament!’” 2006

“I had a girlfriend for a number of years who was a proper farm girl. I used to go out and watch her younger brother shoot cows in the bollocks.” 2006

“We hired a bouncy castle in Las Vegas for a party and decided to dress up as aliens. People definitely lost it there.” 2006

“I’m not really in favour of drugs, but setting aside one day a year for hallucinogenics definitely opens up new doorways.” 2006

“There’s whole sections of my life that I can’t remember. Everything that was my life until I was about 20 is gone.” 2006

“Paris Hilton came to our LA show. She left during the first song on the set. If we’re offending Paris Hilton we must be doing something right.” 2007

“Apparently you’re not allowed to have helicopters fly over big crowds in case they fall out of the sky and start mincing up. Which is fair enough, I suppose.” 2007