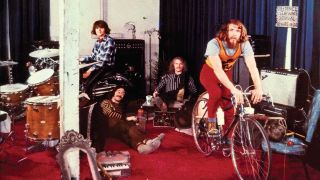 The internet has been throbbing since news broke of an unexpected Starbucks cup somehow appearing in the The Last of the Starks episode of Game Of Thrones. It sent GOT nerds into fits of apoplexy and delighted the web's leading manufacturers of memes.

This got us thinking, which isn't something we do very often. If a coffee cup could somehow slip unnoticed into one of television's most expensive series, what's to stop the same thing happening with album sleeves?

There's a lot going on on the cover of Creedence Clearwater Revival's Cosmo's Factory, for instance. If Tom Fogerty had brought a cup along to the photoshoot and casually placed it on the table beside him, would anyone have complained? (Starbucks wasn't founded until the following year, but bear with us). We think not.

Similarly, The Beatles' iconic Sgt. Pepper sleeve is famously fussy. And if the loveable moptops™ had felt tired after a long day shooting round at Peter Blake's studio, you could forgive them for ordering Magic Alex to run out for a hazelnut latte with five pumps of caramel sauce plus matcha and whipped cream.

Would the resulting image be any less iconic? We don't think so.

Think of it like Where's Wally, but much easier and not as much fun.