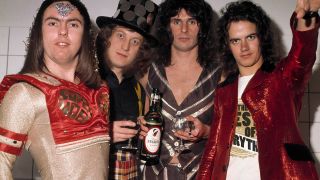 No matter how lucrative, a millstone is a millstone. And while the evergreen charms of the annually unavoidable Merry Xmas Everybody might have allowed the formerly flared gentlemen of Slade to enjoy a lifestyle far beyond the reach of those of us who’ve never availed ourselves of the opportunity to don a tin foil cape, its ubiquity has also served to diminish public appreciation and awareness of the band’s not insubstantial legacy.

Posterity has been extremely unkind to Slade. Victims of the glam zeitgeist coincidental to their rise, they’re forever associated with an anti-style verging on the preposterous. Dave Hill’s coquettish flounces, silver platformed superyobbishness and coypu overbite, Noddy Holder’s mirrored top-hat, bewhiskered boggle-eyed gurn and cortex-searing tartan suits conspire to condemn the band into the arena of the comedic. Which is terribly injudicious, because Slade’s back catalogue brims with a surfeit of stunning material.

The Holder/Jimmy Lea songwriting partnership not only matched Lennon/McCartney and Jagger/Richards in the quality department, they could also go toe-to-toe with them sales-wise. Slade were the early seventies’ equivalent of The Beatles with 17 consecutive top 20 hits, six of which went to number one, but with Merry Xmas Everybody overshadowing all their other achievements like some kind of gigantic tinsel-wrapped Yellow Submarine, it’s extremely unlikely that we’ll ever see a Sir Neville knighted for his services to misspelling.

Far Far Away (from Slade In Flame)

An acoustic, reflective selection from the soundtrack to Slade In Flame (very possibly the finest ‘rock’ film of them all), Far Far Away peaked at number two when released as a single in October ‘74. “I’ve had a red light off the wrist, without me even getting kissed” deadpans a surprisingly unguarded Holder, prior to unleashing a hook you could hang a herd of pregnant yak on.

In the summer of ‘73, Slade were pretty much the kings of the world and Skweeze Me, Pleeze Me captured the peaking quartet on appropriately exuberant form. A muscularly riffed stomper it handed the band their fifth consecutive number one and despite a lyric that hasn’t travelled particularly well across the space-time continuum (“When a girl means yes, she says ‘no’.”) stands priapically proud as prototype lad’s rock in excelcis.

When The Lights Are Out (from Old New Borrowed And Blue)

A certain congruence of style between Holder/Lea and Lennon/McCartney has been remarked upon before, but nowhere is it more clearly demonstrated than when Jimmy Lea steps forward to take a lead vocal on this easily overlooked album track from spring ‘74’s Old New Borrowed And Blue. Cheap Trick covered it on 2009’s The Latest where it fitted perfectly as one of the best Cheap Trick songs Cheap Trick never wrote. Of Lea’s vocal, Holder once said: “There’s nothing like a good singer and Jimmy’s nothing like a good singer”.

A graunchy riff propelled by a trademark propulsive, skipping, off-beat kick-up-the-arse rhythm bed from gum-chewing candy-striped drum leviathan Don Powell, 1972’s Mama Weer All Crazee Now casually pounded its teenaged constituency into the back wall of the school disco. Powered by enough footstomps and handclaps to equip the Millwall F-Troop over a month of Saturdays, it was a fearsome beast indeed. Quiet Riot covered it, but they really shouldn’t have bothered.

Of course there have always been two sides to the Slade coin, for every pounding, terrace chant there’s a sensitive ballad, and Everyday is arguably the finest example of the latter. The follow-up single to ‘that Christmas record’ peaked at number three in ‘74, and features a schizophrenic Noddy Holder vocal performance to die for. Sensitive and reserved on the verses, catterwauling and explosive on the choruses, raw and abrasive enough to scour or scare a Lennon, it’s vocal overkill at its most glorious.

Get Down And Get With It (single)

It was in the live arena that Slade were always invincible. They first broke into the UK charts in 1971 with a foot-stomping, hand-clapping, call-and-response studio version of Bobby Marchan’s Get Down And Get With It (a reliable staple of their live set), and when called in at the last minute to stand in for Ozzy Osbourne’s Blizzard Of Ozz at the 1980 Reading Festival they deployed their crowd-pleasing secret weapon to ultimate effect. Slade were down on their luck in 1980, the hits had dried up and they’d already decided to split when the Reading call came. They utterly stormed it, stayed together for another 12 years and returned to the top 50 another seven times. Or another 21 times if you count Merry Xmas Everybody…

Coz I Luv You (from Sladest)

Almost bizarre in its unique collision of understated stomping, unrequited Lennon keening and viciously slashed gypsy violin, Coz I Luv U took Slade to the top of the charts for the very first time and remained at the top for a month before being dislodged by Benny Hill’s Ernie (The Fastest Milkman In The West). Obviously, it was an astounding record, but Top Of The Pops viewers were entranced by Slade’s astounding visual image. Tartan Noddy’s flat cap, mutton chop whiskers and Dave Hill’s… well, everything, were about as homely a version of glam as was ever rocked.

In For A Penny (from Nobody’s Fools)

“Play the refrain” insists Noddy, as Dave Hill unleashes an absolute peach of a lick. Slade were already in commercial decline when their sixth Nobody’s Fools album landed in 1976. America proved to be the band’s Russian front, trying to break the U.S. meant prolongued time away from a U.K crowd already primed for punk’s new broom. As Hill embarks on his longest guitar solo of any Slade single, Noddy remarks ‘Gee, they got a band’ referencing a contemporary TV advertisement for Bird’s Eye Beefburgers. Only in the seventies…

Obviously, the chart-topping 1973 single version is the one most people are familiar with, but this version was re-recorded for 1985’s (largely preposterous, Crackers! The Slade Christmas Album) possibly as a reaction to the cover version that Quiet Riot – yeah, them again - took to the U.S. top five in ‘83. From its introductory ‘Baby, Baby, Baby’ it romps from the speakers like a herd of rampaging Lemmy, even Oasis’s ‘96 version can’t out-yob this one. It’s a big-bollocked bastard of a barnstormer, and no mistake. And Don Powell’s drums? Mental… In the most excellent sense of the word imaginable.

How Does It Feel? (from Slade In Flame)

The great lost Slade song. Noddy Holder’s favourite. The opening theme to one of the best, yet most undervalued movies of the 1970s. When released as a single, Slade In Flame’s How Does It Feel? stiffed at number 15, an implausibly poor performance for a Slade single in 1975. The band’s commercial decline started here, somewhat ironically, at their artistic peak. Noel Gallagher called it: “One of the best songs writen, in the history of pop, ever.” And, for once perhaps, he’s not wrong.