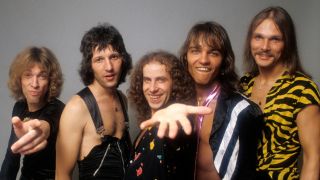 Germany rock has long been regarded as being amongst the most successful and innovative in Europe. From krautrock through to metal and hard rock, the list of quality bands who’ve come out of the country is impressive. It’s a list few other European nations can compete, and to prove the point, here are 10 of the best…

A band now with a half century history, Scorpions might have begun in a psychedelic vein but quickly developed their own sense of hard rocking style, which saw them burst out of Germany and become internationally successful. The band’s output during the 70s and 80s was magnificent, even if some of the album covers were a little risqué. And they still command a vast global audience, thanks to the impact of albums like Lovedrive and Love At First Sting.

It’s a well known cliché that only bands who sing in English can hope to succeed. Then along come this Berlin band, proudly writing German lyrics, and they storm the world. Their martial, anthemic sound has proved to be captivating, while the Rammstein live show gives a new meaning to the term ‘spectacular’. Watch the Rammstein In Amerika DVD and listen to the Mutter album – you’ll get what they’re about.

Right at the centre of the whole krautrock movement, Tangerine Dream constantly altered the parameters of electronic music within rock, and in doing so were at the forefront of so much that was exciting and dynamic on the scene. The tentacles of krautrock spread everywhere, and this band were a major reason. Always relevant and challenging, their near 50 year history is full of landmark albums, such as Phaedra and Turn Of The Tides.

You could make a strong case for this lot’s Fast As A Shark in 1982 being the first true thrash metal track. But Accept were always more at home with combative yet melodic songs, playing with verve and virtuosity. They blazed out of Germany at the start of the 80s, and quickly became one of the most sought after metal bands around. They had much in common with both the Scorpions and Judas Priest, and have left a trail of memorable songs on landmark albums such as Restless And Wild and Balls To The Walls.

When Uli Jon Roth left the Scorpions in 1978, it was to pursue his dream of recording music more in touch with his soul. Electric Sun fulfilled this desire. Predicated on his love for Hendrix, the band had a spiritual resonance with Roth’s own cosmic awareness, yet also strove for an excellence and discipline in the music they recorded. The trio allowed Roth’s imagination to take flight, and on Fire Wind and Beyond The Astral Skies the creativity was astonishing.

Although fronted by English vocalist John Lawton, this was most certainly a German band, one who combined progressive influences with jazz and hard rock in a manner both unusual and captivating. Their first four albums in the early 70s were each radically different to one another. This was one band who were delightfully experimental and refused to follow a formula. All of which means no album adequately represents what they were about. But Where Groupies Killed The Blues and I’m Just A Rock ‘N’ Roll Singer give a flavour of the Luciferian approach.

Quirky, eccentric, provocative, Birth Control were a prog rock band for whom anything went. Despite the fact they only split up in 2014, their finest work belonged to the 70s. They had the ability and agility to take seemingly straightforward compositions and twist them into almost incomprehensible shapes, yet they still remained accessible! Operation and Plastic People represent them in their pomp.

Regarded as one of the pioneers of krautrock, Can transcended this label, simply because they had such far reaching aspirations. Their basis might have been electronic music, but into this they fermented jazz, hard rock, world music and even funk. All delivered with an eye for the appeal of the avant-garde. What helped them to remain steadfastly individual was that much of their output was created spontaneously. Their albums featured what were termed ‘instant compositions’. Just how well this could work comes through best on Tago Mago and Future Days.

While Helloween were regarded in their formative days as thrashers, that was never really true. The band were always more in line with power metal, and as their career developed in the 80s this became increasingly dominant, so much so that they came to be acclaimed as the German Iron Maiden. In their prime, the band had an obvious melodic curve, but this was strapped to some thunderous riffage. Check out the Keeper Of The Seven Keys: Part I and Keeper Of The Seven Keys: Part II.

While this translates as The Dead Trousers, a seemingly barmy and innocuous name, this band have always been renowned for their vehemently political lyrical stance. Openly supportive of organisations like PETA and Greenpeace, musically they began very much in the punk vein, but over the years have taken on board reggae, jazz, metal and even gypsy music. This has given them a unique and far reaching edge. We recommend starting with Ein Kleines Bisschen Horrorschau and Kauf MICH!.