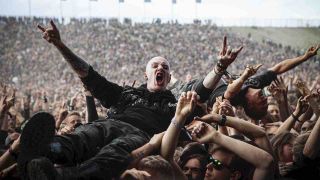 There are few things as satisfying as a perfectly-executed breakdown. These are the sublime moments in metal where, after an appetite-whetting lead-in, all the instruments blare out in sync. They’re the cathartic crescendo after an introduction, a solo, or even an entire song. Naturally, when the best of them land, they make everybody listening lose their minds! And these are 10 of the absolute heaviest.

Emperor – I Am The Black Wizards

Emperor’s landmark black metal anthem I Am The Black Wizards boasts two breakdowns early on, and both feel seismic enough for the Richter Scale. The first comes after a whirlwind opening from Ihsahn and Samoth’s guitars, suddenly introducing the bass and drumming with cataclysmic force. The next one follows by blasting out after a clean break, with a shrill vocal wail echoing on top. They’re a pair of gargantuan slams that warm even the blackest hearts.

Say what you will about Catch Thirtythree and its programmed drums (and many people have), but Dehumanization stands as one of Meshuggah’s most underappreciated songs. Sure, it’s a very short snapshot of what the Swedes are capable of. However, the eerily captivating guitar lead that runs through it is pure gold – as is the mental breakdown midway through. It takes you from melody to outright brutality in a mindboggling nanosecond.

Gojira's Flying Whales both begins and ends with breakdowns that will reconfigure your spine. The first is the payoff to a trudging, near-three-minute buildup, shattering the ambience and whalesong with strong guitar chords and Mario Duplantier’s merciless drumming. Then, the latter of the two opens Pandora’s Box for the track’s final riff, heralding the arrival of harsh pick scrapes and, if you’re watching live, the band’s four members going apeshit.

Blaring out less than thirty seconds into the Georgians’ ground-breaking second album, Leviathan, you could well argue that Blood And Thunder’s breakdown helped launch Mastodon’s career. And, sixteen years later, it still feels like the quartet’s greatest moment. Those opening guitar chords are a clarion call at live gigs, signalling that shit is about to hit the fan. Brann Dailor’s drums and Troy Sanders’ roars land immediately after, and collective minds are lost.

Barring their lyrical goriness, Cannibal Corpse’s success is built on one thing: the sheer intensity of their rhythm section. And nowhere is that more apparent than on the biggest breakdown of their signature song, Hammer Smashed Face. In this gnarly death metal classic, a bass break from Alex Webster early on is the only relief, lingering for a few seconds before quickly descending into a blast beat-laden frenzy. It’s pure, disgusting relentlessness.

If a breakdown’s heavy enough to get 1.6 million barely post-Soviet Russians moshing, it’s definitely heavy enough for this list. And that’s exactly what the bridge of Pantera’s Domination did in 1991, juxtaposing a flashy Dimebag solo with a slow and primal smack. Open string chugs and hammering snare drum strikes are married perfectly, getting as brilliantly bare-bones as possible, before the song rebuilds with a second (equally mental) solo.

Although they’re now a household name, Korn were an unknown back in 1994. So, as both the lead single and opening song of their debut album, Blind was the first thing people heard from this quartet. What a way to start. After almost a minute of buildup knitted around David Silveria’s cymbals, a seven-string hell breaks loose. Sure, there’s a second breakdown at the song’s conclusion, but nothing matches that initial, powerful bang. Are you ready?

Roots Bloody Roots is among Sepultura’s simplest yet most primal tracks, witnessing the Brazillian masters draw inspiration from their home country’s samba rhythms. As a result, it’s a percussive powerhouse, at its most magnificent after a brief Andreas Kisser guitar lead explodes thanks to the thunderous drumming of Igor Cavalera. Add in brother Max yelling “Roots! Bloody roots!” with godlike force and you have one unstoppable start to a metal track.

At The Gates – Slaughter Of The Soul

At The Gates’ Slaughter Of The Soul is pure energy incarnate, epitomised on its blistering title track. Coming after the blitzkrieg that is Blinded By Fear, Slaughter Of The Soul allows only a few measures of respite, which quickly cave under the might of Tomas Lindberg roaring “Go!”. What follows is three minutes of anarchy that many say started the metalcore genre, and that that genre could still never replicate.

Loved by the mainstream but controversial among diehard fans, Metallica’s Black Album has drawn multiple accusations of selling out. However, the opus is nowhere near as soft as the elitists would have you believe. Rather, it trades thrashing speed for a more crushing, mid-paced stomp, as felt in the headbang-inciting Sad But True. Those five snare smacks herald Metallica’s most pulse-pounding breakdown, still just as exciting nearly three decades later.