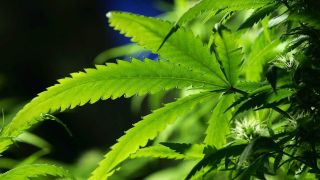 Stoners of the world rejoice! Yes, it’s April 20th again. And you know what that means (and if you don’t, you probably are smoking too much after all. Or not enough)? But don’t go darting into the living room with your newly acquired baggy of buddy goodness only to stick fucking Pineapple Express on for the 900th god-damn time. From the moment Black Sabbath told us all about the pleasures of the Sweet Leaf there has been stoner metal – often derided as simplistic or just plain juvenile, there’s far more depth and diversity to the genre than meets the (red) eye. So, to celebrate international 4⁄20 day here are ten of the best stoner metal tracks of all time.

The high (bong) watermark for the entire stoner metal subgenre. So utterly peerless is Sleep’s masterpiece that it’s easy to forget it was originally recorded 20 years ago. At just over 70 minutes long, the sprawling, transcendental riff odyssey is long enough for you to blow through your whole stash… if drug induced comas are your thing. “Drop out of life with bong in hand,” indeed.

The fact that bassist/vocalist ‘Dixie’ Dave Collins shot his own toe off probably tells you everything you need to about North Carolina’s Weedeater. Completely lacking in pretension, and so self-aware of their simplicity as to be almost genius – with the trio’s dense, sludgy grooves and punk mentality God Luck And Good Speed is like smoking sticky bud out of a Pabst Blue Ribbon can. Drop out of life? You already did, to distil moonshine in a shack, didn’t you mate?

Creating albums with titles like Great Barrier Reefer and Hippie Killer while dressing like you work in River Island makes it look like you’re taking the piss. Except Chicago-based instrumental quartet Bongripper most certainly aren’t – their 2010 opus Satan Worshipping Doom might just in fact be the most perfectly heavy stoner record ever made. And when this track drops live, it’s like a mass at the Wailing Wall or something. Drop out of life, and keep going, down into narcotics addiction and selling your own teeth.

The perfectly nihilistic antithesis to every cod-reggae listening, Bob Marley idolising bibble who you want to strangle with their own hemp-made trousers. Dorset doom stalwarts Electric Wizard might be 23 years into their career now, and whilst 2014’s Time To Die was their best album in years, they’ve still never bettered this ode to the noxious, paranoia-inducing qualities of the ‘erb. Drop out of life, and take as many innocent people with you as possible.

Newcastle quintet Bong will be particularly unhappy at their inclusion in this list given their expressed dislike of being associated with the stoner genre – as evident with their sarcastically titled 2014 LP Stoner Rock. But the fact remains, if your plan for the afternoon is to light up a pipe made from a Minotaur’s shin bone, then their immersive, tantric, drone-based excursions are hard to beat. Drop out of life very, very slowly indeed. And take some sitars with you, yeah?

Proof that the not every band operating in the so-called ‘stoner’ genre ascribes to the notion of ‘down tune; play Sabbath riffs very slowly’. Chicago’s Oozing Wound take as many cues from early Metallica and, err, Tankard, as they do from the likes of Saint Vitus or Sabbath, and their stoner/thrash maelstrom is all the more potent for it. Drop out of life-times at Ridgemont High.

The likes of Electric Wizard aside, don’t be fooled into thinking that the highest grade of stoner metal is strictly the preserve of our American cousins, oh no. Part of the newer breed of UK stoner bands, following in the fine tradition of the likes of Iron Monkey, is Croydon’s Slabdragger. The trio may have perfected their lo-fi, Sleep-covering-Black Flag style, comic book stoner/doom on latest LP Rise Of The Dawncrusher, but the riffs wielded here sees the band at their blazed-out best. Drop out of life, and straight into the pages of 2000 AD, using Judge Dredd’s helmet as a bong.

Drugs will make you do strange things kids – like form an insanely proficient death metal band that’s sole reason for existence is seemingly to create excuses to turn existing death metal song and album titles into weed related puns. And we for one commend them, especially when the results are as chillum-crackingly excellent as the Richmond, Virginia, quartet’s 2008 released block of resin-y, chug-y goodness Tube Of The Resinated. Drop out of life, and end up in a scene from The Walking Dead, except one where you’re using a biters’ femur to grind your weed, before using their peeled skin as a blunt wrap.

Far from the most out-and-out perfect Kyuss song; there’s a story that this track from the legendary quartet’s debut full length – Blues For The Red Sun – is actually an ode to Josh Homme’s old Mk III Ford Capri. But we know better than that, don’t we? Light one up, think of the desert and thank us later, yeah. Drop out of life, become increasingly part of the establishment and end up producing Arctic Monkeys albums. Tragic really.

In truth we could’ve filled this entire list solely with bands who have awkwardly shoehorned ‘Bong’ into their band name somewhere – the brutal, blues-based deceptive simplicity at the heart of Wisconsin quartet Bongzilla is hard to beat, however. Drop out of life, and into nicking car stereos to feed your habit.

Please note: we obviously don’t condone smoking marijuana. But we do highly recommend listening to these songs.