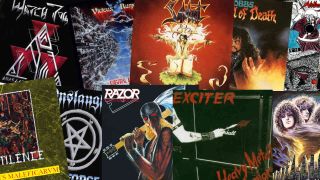 Everyone knows the story of thrash: Metallica invented it, then Slayer, Anthrax and Megadeth came along and helped them clear up. The end.

Except it wasn’t quite like. The original 80s thrash scene was a vivid and vibrant movement that extended way beyond The Big Four and a subs’ bench that featured the likes of Testament, Exodus, Forbidden and more.

In fact, the deeper you dig, the more treasures you uncovered, from the proto-thrash of Exciter and Razor to such purveyors of genre-warping noise as Watchtower, Pestilence and Sabbath.

We've brushed the dirt from 10 cult thrash classics that show what the 80s scene was really all about.

Often overlooked when the thrash metal tale is told, Exciter (formerly known as Hell Razor when formed in 1978) were on the case even earlier than Metallica. Formed in 1978, the Canadians had taken the metallic might of Judas Priest and injected it with a massive dose of amphetamines, resulting in a sound that came ready-wrapped in studded leather. Released in the same year as Kill ’Em All, Heavy Metal Maniac was arguably a better indication of how thrash would develop than Metallica’s debut. Songs like Stand Up And Fight and the remorseless Under Attack had all the ferocity and velocity that would become de rigueur in the years to follow.

Given that thrash metal very much originated in America, the bulk of the major players have always been from that side of the pond, but gradually as the influence spread through metal, so Europe began to develop its own healthy thrash sound. Artillery hailed from Denmark and, aided by the tape trading scene which had benefited the rise of bands like Metallica and Anthrax, made a name for themselves alongside Mercyful Fate as one of Denmark’s leading exponents of aggressive metal. Some might find Flemming Ronsdorf’s histrionic vocals a bit much, but their second album, Terror Squad, is quality Euro thrash.

Capable of matching most of the speed metal bands coming out of America, Canada’s Razor were very much a jeans, t-shirt and leather jacketed type of band – basic, down to earth and out to crunch and crush. This was their debut album, and it left little to the imagination. But while it’s easy to fall into the black pit of riffage here, there was always more to the band than sheer, unbridled heaviness. They also wrote cunning melodies, as witnessed on Take This Torch. That’s why Executioner’s Song has survived in its own right as considerably more than a curio.

Jazz and progressive rock are not two genres one might normally associate with thrash metal. Yet both are present within the story of Austin, Texas quartet Watchtower who combined an over-the-top love of prog rock with metallic power at a time when it was largely unheard of. Yet the sound of their 1985 debut Energetic Disassembly proved to be very popular in Europe, mixing an Iron Maiden-like metallic charge with the technical prowess of Rush. Singer Jason McMaster decamped to hair metal posers Dangerous Toys for reasons best known to himself, just prior to the follow-up Control And Resistance.

Dirty, uncompromising and up to their necks in satanic imagery, Onslaught were the grimy underdogs of the UK thrash scene, and The Force was their ultimate statement of ill intent. Inspired by both the nascent thrash scene and the filthy hardcore punk intensity of Discharge and GBH, the Bristol bruisers played songs like Let There Be Death and Flame Of The Antichrist as if they could sense Lucifer’s breath on the back of their necks. Three years later they would give their sound a strenuous polish for major label compromise In Search Of Sanity, but The Force was Onslaught in excelsis.

The Germans hit their straps with this second album. If their debut, 1985’s Infernal Overkill, was overloaded with enthusiasm, here they had more dynamic, aggression and technical fortitude. It’s on this record that Destruction established themselves as a major force on the German thrash scene. What they captured was a distinct Teutonic style and sound.  Tracks like Life Without Sense and United By Hatred have such a ferocious energy, but stay on the rails due to the formidable musicianship of the trio. This is a landmark for Destruction, and for the European scene. Destruction would never be this good again.

A band with its collective finger lodged in several different musical pies, San Francisco’s Vicious Rumors always played with speed and brutality – check out Minute To Kill and Worlds And Machines on this, their second album – though refused to be pigeonholed. The formula would eventually bring them a major label contract with Atlantic, though possibly due to the fact that they also appealed to Crüe fans, disciples of axe-widdling (Geoff Thorpe remains a guitarist of international repute; their ranks have also featured future UFO man Vinny Moore) and the power metal brigade. Sadly, their window of opportunity was to prove short-lived.

Thrash metal never registered too highly on the Australian rock scene, the country frequently preferring rowdy rock sing-a-longs to grating metal. Despite this, the country offered up Mortal Sin and Hobbs’ Angel Of Death, the latter more of a solo project for ex-Tyrus guitarist Peter Hobbs. Hobbs referred to his band’s sound as virgin metal (as in, ‘pure’ metal) but in reality the band’s 1988 self-titled debut had more in common with the intense wall of Satanic noise offered up by the likes of Slayer. Never more than a cult phenomenon, the band all but vanished after the debut, re-appearing in 1995 to little fanfare.

Although latterly celebrated as one of the most creative and classy of all death metal bands, Pestilence were very much students of underground thrash when they followed their first two much-traded demos with this, their monstrous debut album. Thanks to the subtly inventive guitar work and proudly open-minded vision of driving force Patrick Mameli, these gifted Dutchmen always sounded like they were pulling effortlessly away from their influences, and on songs like the vicious Parricide and prog-tinged rampage Bacterial Surgery, it was clear that they were using the thrash template as a springboard to more adventurous territory.

UK thrash was destined to struggle, forever languishing in the shadow cast by the American scene, but Sabbat made our home-grown efforts impossible to ignore, creating a huge and lasting contribution to the genre, and providing inspiration for the black metal generation that emerged in their paganised wake. Owing little to the souped-up traditionalism of their US peers, Sabbat’s sound was dizzyingly epic and fervently original, as guitarist Andy Sneap’s riffs and dense, convoluted arrangements combined with frontman Martin Walkyier’s verbose shrieking to thrilling effect. Brave, literate and startlingly heavy, Sabbat’s debut kept the British metal flag flying high.