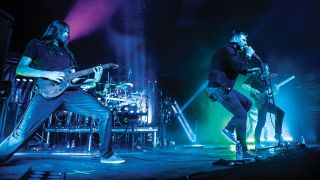 If you can peel yourself away from the Main Stage or the almost equally star-studded Encore Stage at this year's Download Festival, you might be headed to The Dogtooth Stage to catch melodic death metal pioneers At The Gates, UK death legends Carcass or US thrashers, Municipal Waste (all excellent choices, by the way) or perhaps you will take a peek at the Avalanche Stage on Sunday for Enter: Shikari?

Well, the headliners aren't the only ones with plenty to offer. We've had a good hard look at the line-up and bring you our very own Metal Hammer curated list of top bands to check out at the smaller stages – or at least on Spotify, if you aren't attending the fest!

One of the most hyped young UK metal bands of last year, Conjurer have spent the months since building their reputation as one of the best live bands in the game today. Expect the crushingly heavy Midlands metallers to steal the show on the Dogtooth stage on Friday.

Catch them Friday @ 16:00 The Dogtooth Stage

This enigmatic duo write twisted nu metal-influenced songs about serial killers, and have even had Jonathan Davis guest on the blood-curdling Gary Heidnik. Singer Skynd wears black contact lenses and carries around a doll of herself, while co-conspirator ‘F’ wears a gimp mask. Expect total weirdness.

Catch them Friday @ 16:50 The Dogtooth Stage

Owing a massive debt to Mike Patton, Twelve Foot Ninja are bringing their avant-garde Mr. Bungle vibes to Download. The Aussie outfit’s unique mixture of heavy dent-shaped beat downs and Faith No More channeling funk-shaped metal is as eccentric as it is progressive. They are known for tongue-in-cheek videos full of drag, costumes, piss-takes and general comic weirdness, so they are sure to bring a fun-filled show.

Catch them Friday @ 19:20 The Dogtooth Stage

The four-piece Ukrainian metallers have been gaining some real traction in the past few years with their unique blend of death, hardcore, prog and groovy nu-metal. Aside from some the fact that these guys exhibit some astounding technical ability on their instruments, vocalist Tatiana Shmailyuk subverts any stereotypes or pre-conceptions you may have about female fronted bands – her thunderous gutturals put most men’s to shame.

Catch them Friday @ 20:15 The Dogtooth Stage

Australian progressive metal… with a violin. Encompassing black, thrash, death metal and more, these guys play heavy music that’s taken to a new, grandiose level with the addition of strings. It really comes to life live, as they create an all-encompassing atmosphere of bleak beauty.

Catch them Friday @ 21:10 The Dogtooth Stage

Hailing from Kathmandu, Underside have long nurtured the Nepalese scene, even creating their own festival - Silence - which Hammer have been lucky enough to witness. Combining metalcore with sociopolitical lyrics, they’re passionate about bringing their music and message to the masses. Oh, and they’re likely to have a dancing demon onstage…

Catch them Saturday @ 12:50 The Dogtooth Stage

These Japanese power metallers are the real deal. They might come from the land of idol bands and singers, but they’re genuinely into heavy music, with singer Miho wearing her Iron Maiden and Manowar influences on her sleeve. They got bumped up to the main stage at Bloodstock last year and owned the shit out of it.

Catch them Saturday @ 14:40 The Dogtooth Stage

These Mongolians play what they’ve dubbed ‘hunnu rock’, employing traditional horse-head violins and throat singing to create rhythmic music that evokes the vast landscapes of their home country. Having seen them play at the Mongolian Embassy this week, we can vouch for the fact they’re a powerful and talented force even when unplugged.

Catch them Saturday @ 16:35 The Dogtooth Stage

Black metal’s surprise breakthrough band last year, Poland’s Batushka have now split into two, warring factions. It may be hard to tell which version will be materialising at Download, due to their ceremonial robes and masks appropriating a shadow version of the Orthodox church, but expect liturgical grandeur, diabolical blessings and the kind of all-encompassing, reality-warping spectacle that will make your journey to the beer tent afterwards an even more hazardous experience.

Catch them Saturday @ 18:35 The Dogtooth Stage

If you need to take your mind off your developing trenchfoot, head to the Dogtooth Stage on Sunday evening to be swept away, mentally at least, by hugely influential, Gallic blackgaze pioneers, Alcest. Managing to unite old-school and post-black metal fans, their elysian reveries will provide 30 minutes of sublime, deeply evocative escapism.

Catch them Sunday @ 16:50 The Dogtooth Stage

Download festival will take place on the weekend of 14-16 June 2019. The campsites will open on Wednesday 12 June. For more info on what the festival has to offer, aside from its stellar line up, click here.