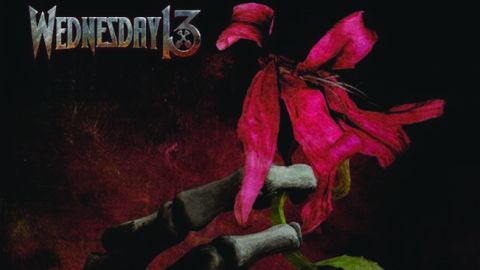 Over the last 10 years, Wednesday 13 has built up a potent arsenal of horrorpunk in thrall to White Zombie, Alice Cooper and Misfits. Yet prior to the release of his seventh album, Wednesday warned he was abandoning that sonic bedrock for a “full-on metal vibe”. Of course it’s not the first time the Master Of Macabre has mixed things up; last album, Monsters Of The Universe, dabbled with more metallic sounds while on 2013’s The SOFTWAREmark” gingersoftwareuiphraseguid=“cdd11ff5-1b4a-413b-b65d-4f8dc14046a1” id=“c821424e-2bfb-452d-bf06-3eddff74a956”>Dixie Dead, he started to do away with his campier, cheesy trappings – but now, signed to Nuclear Blast, Condolences is the first time he’s committed to making an all-out metal record. What The Night Brings and Cadaverous are both anthemic, squealing Manson-esque club stompers and Wednesday’s nails-down-a-blackboard rasp is suited perfectly to the harsher, b-movie aggression of You Breathe, I Kill and Omen Amen, both his heaviest offerings to date. The album closes on brooding ballad SOFTWAREmark” gingersoftwareuiphraseguid=“ed993062-ad5e-4aa6-b8f1-7515735fef37” id=“3ef65ff6-adb8-48e2-b92e-a2d44c4e4e55”>Death Infinity, a ghoulish lament to mortality and death that oozes with dark-hearted ambience. This is new territory for Wednesday but further proof that, as with his other guise as Southern-fried country outlaw Bourbon Crow, he can rock any sound he turns his hand to. That Murderdolls reunion he teased recently might never see the light of day, but for now Wednesday is in his element, sinking his teeth into another meaty reinvention.