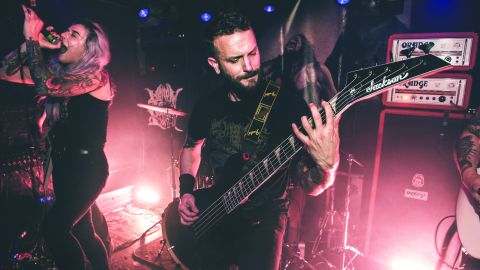 In small venues it’s easy for shows to bleed into one unless there’s something really special that sets one gig apart. Tonight is one of those special nights; this is a death metal show, but there’s enough going on with some expertly performed nods to other genres to keep any crowd’s attention. CORRUPT MORAL ALTAR [7] are an in-your-face storm of anger and energy, with unexpected hardcore-inspired breakdowns where singer Chris Reese windmills wild-eyed around the stage. When he thanks the crowd at the end, his soft, polite tones are almost comical compared to the ferocity of his performance. VENOM PRISON [8] prove that they’re more than ready for bigger venues with a set so powerful that not a word needs to be spoken. Larissa Stupar’s vocals are a lesson in how to channel aggression with visceral emotion, but also with power and poise, and the undeniable deep grooves and ripping solos show there’s more to this band than simply the “animus” they describe on their debut album. Perpetrator Emasculation has become a signature track because of its brutal and genius approach to turning misogynist death metal tropes on their head, but this band’s message is just one of their facets worth talking about. The short set is tight, by turns melodic and earth-shatteringly bleak, as VP continue to breathe new life into death metal while still staying faithful to the traditions of the genre.