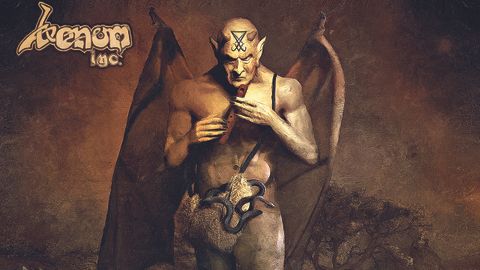 Let’s not waste any time arguing about which incarnation of Venom is the real deal; Venom Inc. have arrived, and Avé suggests that they are both a formidable and credible rival to Cronos and his now well-established latter-day henchmen. In fact, the similarities between the two bands are less striking than you might imagine. Venom Inc. are noticeably less dependent on the original band’s blueprint, as shades of guitarist Mantas’s recent work with M-Pire Of Evil intermittently sneak into his ruthless barrage of gnarly riffs, and Tony Dolan’s gargoyle snarls give everything a distinctive character. Admittedly, opening epic Avé Satanas and closing neck-wrecker Black N Roll are very straightforward nods towards Venom classics of old, but the stomping industrial vibes that drive single Dein Fleisch along point to an esoteric influence or two. Elsewhere, Time To Die is pure pummelling crossover thrash with some razor-sharp twists and turns and I Kneel To SOFTWAREmark” gingersoftwareuiphraseguid=“ae69957d-d636-4115-bc17-9fe6a52e6b11” id=“f345ed74-4fec-4bdb-8707-9c301073b26e”>No God churns, scythes and swings like Triptykon channelling ZZ Top. A bruising first salvo from some genuine unsung metal heroes, Avé welcomes us to Hell all over again, and it’s an offer discerning metalheads will not refuse.