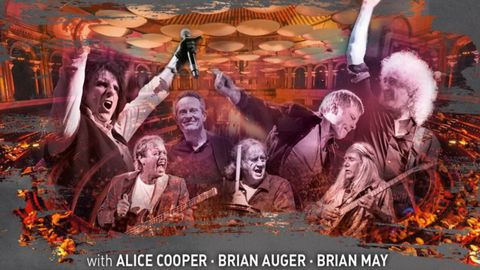 It’s a Deep Purple keysman memorial mk2, as organisers Ian and Jacky Paice opened doors to the public for this night of charitable shoulder rubbing and Jon Lord-commemoration.

A shot of ‘young blood’, in the form of The Temperance Movement, kicks things off, complete with Phil Campbell’s fledgling chicken-man dance. Bassist Nick Fyffe then joins the backing band for a night of big names doing (mostly) big ’choons.

Uli Jon Roth noodles something instrumental and Scorpions-y; Mark King busts out Level 42 tuneage; Brian May supplies guitar godliness for Since You’ve Been Gone (Kerry Ellis in tow). So far so sensical. Except when housewives’ crumpet/opera populist Alfie Boe appears for a blast through Rock’n’Roll. It’s quite bizarre.

Normality is restored by Bruce Dickinson and John Paul Jones leading a cheery romp through Black Night, and Alice Cooper propelling joie-de-vivre through the roof with School’s Out. Certain killer riffs are a little lost in the mix, but it’s a jolly knees-up for the most part./o:p