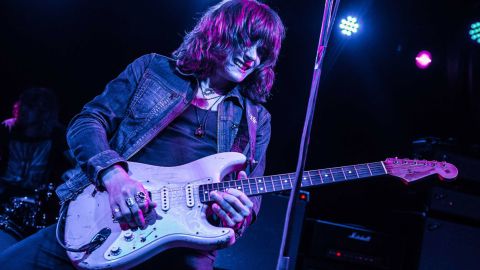 On Saturday Tyler Bryant was playing to 60,000 AC/DC fans at the Olympic Stadium. Two days later, on a quiet summer evening in North London, he’s in front a couple of hundred in a two thirds-full pub. It’s a testament to his professionalism that this doesn’t feel like a post-weekend comedown, and by the end of the night you can hear punters — many of whom have obviously caught him supporting Angus and co. — chattering excitedly about glimpsing a future guitar hero up close. He’s good - make no mistake about that.

It helps, of course, that he looks the part. The tousled mop of hair screams ‘young Jimmy Page!’ and he moves around the stage with the grace and elegance of samurai swordsman. By the third number the jacket is off and he’s stripped to a dark vest.

The Shakedown are a tight but versatile unit that complement him perfectly. The bluesier tracks from the first album Wild Child creep in during the middle section — as well as their head-nodding cover of Muddy Waters’ Mojo Workin’ — but these are interspersed with heavier numbers from the upcoming second album, one or two of which glance towards the more portentous end of grunge; close your eyes and Aftershock could be peak period Soundgarden.

It’s a cunningly-paced set that never sags. Indeed, the Shakedown seem to be supremely adept at sustaining an audience’s excitement. There’s ample room for improvisation, with many of the older songs speeding up and slowing down as Bryant leads the four piece through their paces, and drummer Caleb Crosby steps out from behind his kit more than once, heading down into the front rows clutching with his bass drum, Bryant close behind. Meanwhile the guitarist’s own soloing is impressive, but always there to service the song. He throws poses but never preens, and doesn’t resort to flash for its own sake.

By the end of a generous hour and a half Bryant is announcing that he’ll shake hands with everyone in the venue. He’s obviously got the work ethic, as well as the looks and talent. The killer song that’ll break him might not have arrived just yet, but give him time and watch the venues grow. Like most here, I’d be surprised to see him somewhere this size again.