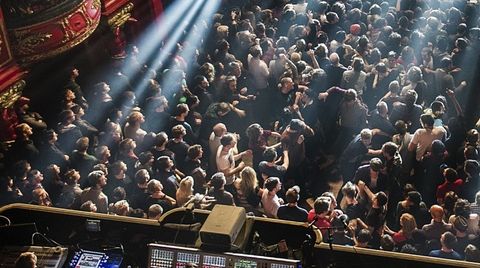 Resplendent in a matching Mickey Mouse t-shirt and trousers, Jacob Field is a ball of energy as he commands a packed venue to “bounce” to The One Hundred’s modern brand of nu metal. What gives their sound an edge over nu metal of old is their propensity towards dance instead of hip hop for the breakneck rap passages. Jacob proves he can hold his own as a metal frontman as well, alternating between high-pitched screams and a deep roar as he tears through tracks from their debut album, Chaos + Bliss. The old sit-down-then-jump-up-again device is a well-used festival and arena technique, but even here, the raucous audience is happy to oblige as Jacob, a bouncing firecracker, instructs them to do so. The audience demands more as he ends the set with a full-throttle rendition of Dark Matter, before reappearing for an encore of Tale Of Two Cities and Kingsmen, which stand up against the faster and heavier newer tracks despite being from the comparatively more electronic first EP, Subculture. What the One Hundred do might not appeal to all tastes, but they do it well.