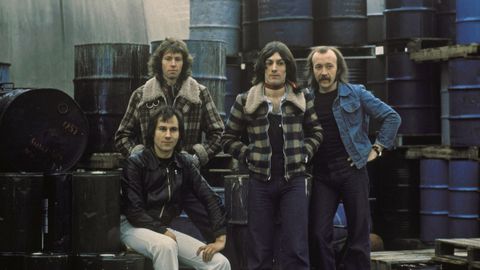 The relentless digital tide of reissues dictates that sooner or later, every band will have their merits and achievements reassessed. But few are more deserving of their sonic, erm, Groundhog Day than Tony McPhee’s perennially undervalued band.

Formed in 1962 and invited by Mick Jagger to support the Stones in 1971, they were – for a brief golden spell in the early 70s – genuine pop stars, chalking up three consecutive Top 10 albums. That said, delving into the back catalogue – this slipcase collection spans the period from second album Blues Obituary to 1972’s Hogwash – feels like travelling back to a long-lost age.

Blues Obituary – originally released in 1969 – reflects the shellshocked state of the nation’s ‘heads’ as the 60s ended, with Daze of The Weak as the frazzled standout (begging the question: were The ’Hogs Danny The Dealer from Withnail And I’s favourite band?).

Follow up Thank Christ For The Bomb is far more coherent. Loosely based around an anti-war theme (complete with a seven-minute title track), it’s conceptual pretensions are backed up by some cracking songs, with McPhee’s Jack Bruce-esque vocals on Garden suggesting an infinitely more sour Cream.

Despite its prog-ish pretensions, 1971’s Split is a more brutal blast of sonic shrapnel, its paranoic feel summed up by proto-metal classic Cherry Red. Their final Top 10 album, 1972’s Who Will Save The World?, is less melodic but much more fun, the apocalyptic themes wrapped up in a comic-book theme, casting the band as ‘men of destiny with secret thoughts of saving the world’. Sigh. The drugs really were a lot better in those days.

Which brings us to Hogwash. A departure from the classic Hog line-up, it finds McPhee experimenting with electronic gadgetry while getting a whole host of gripes off his chest. Opener I Love Miss Ogny is a bitter account of a break-up, while Earth Shanty is as bonkers as it sounds, building from swirling synths to a mellotron-drenched meditation on the cosmos.

Nouveau psych-rock fans switched on by Temples be warned: this is a whole new level of heaviosity.