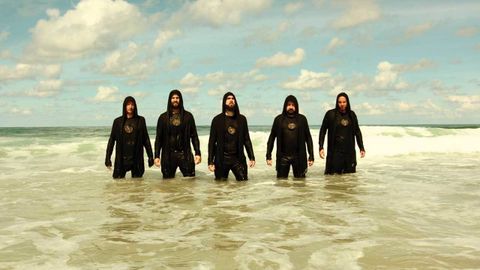 Few historical figures enjoy the feverish and fantastic adoration in heavy metal that the characters created by Howard Phillips Lovecraft do. Born on August 20, 1890 in Providence, Rhode Island, HP Lovecraft devoted his brief and reclusive life to assiduously generating mountains of spine-chilling horror and mind-warping science fiction in which he conjured a demoniac and blasphemous reality of cursed books, vengeful ancient deities and dark, sunless dimensions of stupendous and unheard-of terrors.

His fame soaring only in death, Lovecaft’s influence has stretched across heavy metal’s entire history, beginning with Black Sabbath’s Behind The Wall Of Sleep, (a nod to Lovecraft’s Beyond The Wall Of Sleep), to the golden age of thrash (Metallica’s The Call Of Ktulu, inspired by Lovecraft’s most famous creation, the tentacle-faced sea god, Cthulhu), to works from Morbid Angel, Nile and most recently, France’s The Great Old Ones.

Hatched in 2009 as Benjamin Guerry’s solo project, TGOO declared their allegiance to Lovecraft with a transcendent debut named Al Azif, a shrieking and roaring siege of black metal, plunging through limitless abysses of chilling atmospherics, occasionally catching curious melodic twilights that cast the listener into a mesmerising vortex of rumbling disorder. Once again alchemising Lovecraft’s cursed worlds with pummelling BM riffage, the French metallers have again conjured a parallel universe of treacherous and brooding intensity. Opener The Shadow Over Innsmouth – named after the story of the same name – erupts with startling force, quickly giving rise to a blasphemous frenzy of violent blastbeats and icy riffage that surge tempestuously to the bitter end.

Lovecraftian worship aside, EOD is anything but gimmicky; its authentic melding of Norwegian black metal, layered with early European death and lustrous atmospherics, is both potent and vital. With six proper tracks spanning 44 minutes, each offering stands as a darkly captivating multidimensional saga. The Ritual unveils a vorpal and tempo-shifting excursion through thick arrangements of dense, unyielding riffs that summon eldritch scenes of bullet belts and spiked arm bands, while the raucous clamor of When The Stars Align resolves into a work of almost unbearable sonic extravagance. Compositionally ambitious and musically superlative, EOD delivers a canon of exhilarating and thoroughly modern black metal that will provoke, disturb and unnerve.