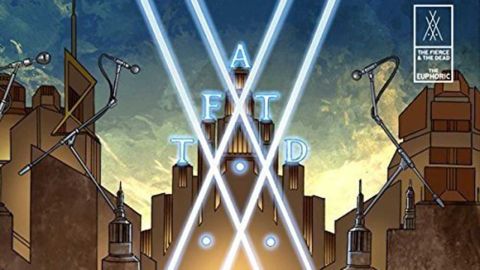 The Fierce And The Dead - The Euphoric

Considering the current geopolitical maelstrom, the seemingly shrinking list of official ‘reasons to be cheerful’ and the general sense that – despite our utter information overload – no one, anywhere, knows what the hell is going on, it follows that bands from all over the spectrum are moving toward material that is darker, angrier and, frankly, more confused.

Guitarist Matt Stevens’ instrumental, proggy, post-something rockers The Fierce And The Dead have been plying their studio trade for some eight years now. Their talent is combining the punk and the progressive (an area of much greater crossover than documentaries would have you believe), with a bold underline of the type of underground, critically kosher metal found amid the single- origin coffee beans in your hipster record shops. They are masters at headlocking this hipper, artsier end of heaviness and persuading it to do their bidding in service of a sort of unpretentious progged-up post-rock.

2011’s debut If It Carries On Like This We Are Moving To Morecambe and 2013’s follow-up Spooky Action both stirred a chunky and unfashionable soup of Helmet, Hüsker Dü and battered delay pedals. Whether or not they were intended to be, both were endearingly rough around the edges – a far cry from the glistening, honed crescendos of Explosions In The Sky et al. Instead they offered a spikier, reactive vision of instrumental rock, with a bit of punk’s spit and lack of polish.

And so to The Euphoric, their third album proper, which takes this worthy amalgam and attempts to stretch it with the addition of more: “More psychedelic, more spacey, more synths, more downtuned guitars,” says Stevens. More weirdness, says Prog. Opener Truck forms a bridge between old and new, with a squelching, flabby-bottomed distortion sound that’s straight out of the Queens Of The Stone Age tone book, while Kevin Feazey adds a chest-shaking bass that seems to peak the sub-woofers in a sort of crumbling sketch of a four-string. It is one of their darker, more haunting and heavier efforts, but will still seem like a logical step to TFATD veterans.

Prog, however, would rather be slapped in the face with new material than massaged into it. We’d recommend Dug Town as a better starting point if you want to figure out what growth has occurred since Spooky Action. Sticksman Stuart Marshall’s hesitant, angsty ricochet beat opens up to reveal a sombre synth bed evoking a sort of paranoid electronica that recalls the soundtrack to Nicolas Winding Refn’s retro-fetish gangbang Drive. If you’re inclined to dance, this would be ‘sad, swaying’ territory. A guitar run that feels like a depressed Vangelis builds, before a crisp single note is left hanging. It’s just five seconds of reverberation but it feels cavernous and, when it gives way, Stevens and co-guitarist Steve Cleaton fill the vacuum with a twin-guitar avalanche that sounds like Thin Lizzy dropping a Weezer outro. You’re left feeling like you’ve travelled from West Coast hip-hop, had a layover in Berlin electronica, only to wind up in Birmingham, sharing a bag of chips with some Sabbath fans.

Dancing Robots is similarly enthralling. Its modulation-warped opening arpeggios might be par for the post-rock course, but it transforms into a hip-shaking shuffle of the sort that, placed in a live context, proves essential in combatting the curse of ‘gig-leg’. In the middle of all this are sections that seem to have been wholesale sampled and transplanted from some lost Rage Against The Machine classic, such is the Morello-esque funk menace of the breakout riff.

Convincing across this kind of varied landscape is a challenge that should not be underestimated, and Marshall is the hidden hero here. Melodic instrumentalists can do a lot to convince with tones and pedals, but percussionists need to be able to change mindsets to achieve the same effect. Marshall does this with ease – in the jazz flurry he uses to underpin the close of Dancing Robots, the grunge drive of 1991 or the alternately tom- thundering rawk and funk snare-snapping Parts 7 & 8 – he seems to stretch and pull TFATD’s musical glutens to surprising new shapes. It is somewhat unfair to single out players, though, because here there is a group- wide conspiracy in the inversion of the classic rhythm section, where the evolving rhythmic and stylistic vortex is cleverly held together by a melodic and tonal palette of similarly hued layers of fuzz, chime and reverberation.

There’s a throughline then, but not where you’d expect it. Instead we get something better: a diverse, dynamic and destabilising document. Post-rock for a post-truth era.