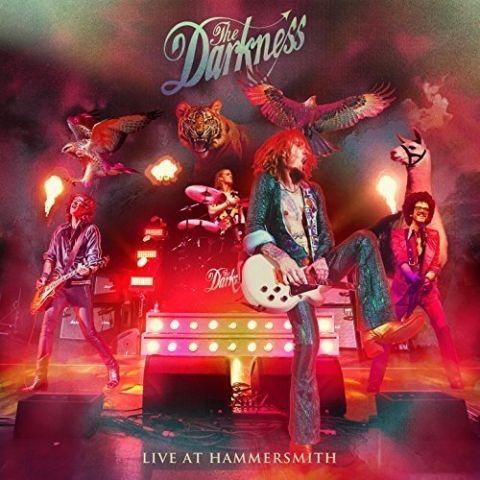 Anyone who witnessed The Darkness’ 2017 Tour De Prance tour knows that the band’s live show isn’t just about the music. A rock’n’roll phantasia combining confetti cannons, pyrotechnics and Justin Hawkins performing handstands in a gold catsuit, it was a gloriously OTT reminder of how much fun a rock show can be in these cripplingly conservative times. But strip away the silliness, and what have we got, exactly? Recorded last December at the tail end of global touring for their Top 10 album Pinewood Smile, Live At Hammersmith provides the answers.

Open Fire sets the tone. A brutalist sonic barrage topped with Hawkins’s spandex-splitting falsetto, it acts as the starting gun for a breathless 19 track rock-a-thon. Black Shuck has grown to monstrous proportions since its first sighting, while a splenetic Southern Trains is even crankier than the studio version, guitarist Dan Hawkins’s white-knuckle riffing mirrored by his brother’s blood-curdling approximation of commuter hell.

Thrilling as it is, it’s also a reminder of the problem the band set themselves with their platinum-selling 2003 debut Permission To Land: how, exactly, do they top that near-perfect assimilation of Queen, Boston and Thin Lizzy? The solution, it seems, as for AC/DC, is to give the fans exactly what they want. So while the highlights from the splendid Pinewood Smile – notably Buccaneers Of Hispaniola and Solid Gold – are well received, it’s the glam-rock histrionics of Love Is Only A Feeling and a turbo-charged Growing On Me that really raise the roof. A mass singalong to fan favourite Friday Night, meanwhile, finds Justin Hawkins purring – literally – with delight.

Live At Hammersmith also comes with a sense of a band who are finally at peace with themselves.

With the drink’n’drug-induced mania of their earlier incarnation behind him, Justin simply seems pleased to still be here. “All I want for Christmas this year is for the children to be safe,” he declares prior to a festive finale of Christmas Time (Don’t Let The Bells End) and an epic I Believe In A Thing Called Love. By the end of this  show, you imagine there wasn’t a dry eye in the house.

On this form, The Darkness are well on the way to becoming a national treasure.