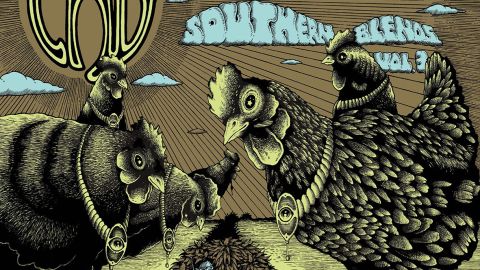 The CRB’s image as a cottage industry specialising in cosmic Americana has seen them build a devoted following since forming in 2010. However, after six years criss-crossing America on a seemingly endless tour, the failure of 2016’s fourth studio album Anyway You Love, We Know How You Feel to trouble the US Top 100 suggested that even diehard fans now see the CRB as a great night out rather than as a great band.

It’s a conundrum highlighted by their third live album. Drawn from 2015 shows in Atlanta, Rayleigh and Charleston, it’s been collated – as with the two previous volumes – by former Grateful Dead sound engineer Betty Cantor-Jackson.

At times, it’s dazzling. Opener I Ain’t Hiding is a funky meditation on the rock’n’roll lifestyle which is almost unrecognisable from the jittery rendition on the Crowes’ final opus, Before The Frost… Until The Freeze. An eight-minute take on Phosphorescent Harvest’s Clear Blue Sky & The Good Doctor also reaches peaks not scaled on the recorded version.

In the wake of the Crowes’ split, both feel like validations of Robinson’s core belief – that being a harmonious unit gives The Brotherhood’s music an organic warmth few others can access.

However, the truth is that their ‘jam band’ ethos isn’t always suited to sober examination. A 14-minute version of Ride, from solo debut New Earth Mud, rarely hits the sweet spots the band are searching for, while Oak Apple Day lacks potency when removed from the doobie-friendly environs of a CRB live show.

The proliferation of covers, including Slim Harpo’s The Music’s Hot, Allen Toussaint’s Get Out Of My Life Woman and Dylan’s She Belongs To Me, are marred by a keyboard sound reminiscent of an early-70s novelty record – peculiar, considering the CRB’s Mastermind-level of knowledge of their source material.

Still, diehards will lap up a triple-vinyl version with a bonus CD recorded live in San Francisco, while the sheer existence of the Betty’s Blends series hammers home the message that the CRB are the spiritual heirs to the Dead’s Californian space-boogie crown. The rest of us will shrug our shoulders and move on.