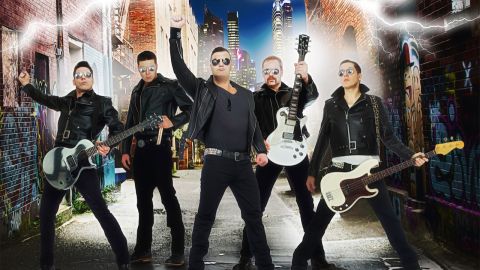 This is the third album from these Norwegian ride-or-dies, and their first in almost a decade. Who the fuck knows what they’ve been doing for the past five years, but from the sound of things, it probably involved motorcycle jumps over flaming pits of fire, or street fights with chains and maces.

It should go without saying that every song on this album is an uppercut to the thorax, bubbling with manic energy and sizzling twin-guitar leads. The surprise twist is the closer (Tonight We’re Gonna) Die Like Heroes, an honest-to-God piano ballad, albeit one that promises blood and mayhem.

Elsewhere it’s mostly monkey business as usual. The chunky Lords Of Thunder throws in Dimmu Borgir’s frontman Shagrath for added growls, Days Of Metal is pure Manowar-esque loincloth-core, and opener Hellfire is like every Turbo-era Judas Priest song played at once.

What’s great about The Carbs is that they’re so insistent about rock’n’roll, like you’re some mouth-breathing imbecile if your favourite bands aren’t Thin Lizzy and AC/DC, or if you don’t wear a leather jacket all the time. Which is pretty much true.