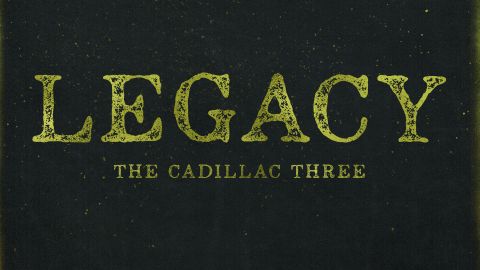 Anyone still banging on about the death of rock hasn’t checked the country scene recently. A riotous assemblage of southern-fried shit-kickers have stolen rock’n’roll’s heart, and are holding it ransom somewhere below the Mason-Dixon Line. Blackberry Smoke, Whiskey Myers, A Thousand Horses, Lee Bains III & The Glory Fires… the list is longer than a coast-to-coast bootleg run.

The Cadillac Three sit at the confluence of these two grand American traditions. The trio’s third album, the grandly titled but stubbornly unpretentious Legacy, yokes the twang of country music to rock’s fuck you attitude. The result is as potent as a batch of freshly distilled moonshine.

The Cadillac Three’s original modus operandi – the missing link between Metallica and Lynyrd Skynyrd – has been abandoned by the side of the road somewhere along the way. Given it was a fairly clunky idea to start with, that’s not the worst thing in the world. They sound way more comfortable in their skin these days, easing back on the heaviness in favour of an altogether more relaxed blend of heat-haze guitars and sippin’-whiskey-on-the-porch grooves.

Not that they’ve thrown the baby out with the bath water. TC3 are still chiefly preoccupied with three things: booze, good times and being from the south. Well over half of the songs on Legacy include a reference to alcohol, not least Tennessee (a celebration of the Volunteer State’s fine musical heritage that name checks fellow outlaw Sturgill Simpson) and rubber-limbed hangover anthem Dang If We Didn’t, a song whose sloppy grin suggests it’s not quite as contrite about what it got up to as it pretends to be. Even on Hank & Jesus, a celebration of two of country music’s iconic figures (that’s Messrs Williams and H Christ, in case you were wondering) a bottle isn’t far away. ‘I was softwareuiphraseguid=“5d368eae-2051-4b9d-a2aa-30b73334bd7d”>baptised in whiskey,’ singer Jaren Johnston croaks in that Tennessee twang, and you kind of believe him.

But Legacy is best when they slide out of the General Lee and step away from the Dukes Of Hazard shtick: American Slang is sleek modern radio rock with a side order of melancholic nostalgia that nods equally to Bruce Springsteen and the Kings Of Leon; the subdued closing title track finds Johnstone in introspective mood, musing that his legacy won’t be his music so much as his family. You can take the boy out of Nashville, etc.

The Cadillac Three won’t win any awards for originality, but then that isn’t really their job. Rock’n’roll is safe in country’s hands.