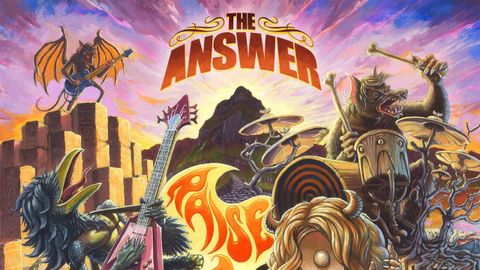 In a music scene increasingly obsessed with next big things, new sensations and hip young gunslingers, it can be tough for any half-decent band to sustain the hype that surrounded them when they first burst onto the scene.

Can it be 10 years since this Downpatrick mob were voted Classic Rock’s Best New Band? It surely can, but since they play the kind of rhythm-riff-and-rasp hard rock that wouldn’t sound out of place 40 years ago or 40 years hence, who’s counting? /o:p

Understandably, the five albums since then haven’t fiddled with that formula too much, but after making a considerable splash with debut Rise back in 2006, they haven’t always found it easy to sustain the same excitement levels.

That probably says more about our fickle tastes than their quality levels – from the outset here you can’t fault the calibre of tunes on offer, and at first it sounds like they’ve even simplified and sharpened their style a little. The dum-dum thump rhythm track of this album’s opener Long Live The Renegades seems to reflect the influence two years of touring with AC/DC had on stripping back their sound, when they opened for Angus and co on the Black Ice World Tour in 2009.

As the title suggests, It also has a certain rabble-rousing anthemic quality to it, but quite what it’s an anthem to is frankly, a little unclear: ‘Long live the renegades in a fast ticket world/ You can’t stop the renegades/Great big heart of yours can never die,’ sings Cormac Neeson.

However, a tight, staccato riff from guitarist Paul Mahon, accompanied by a neat solo, makes for a fine introduction to proceedings. From thereon in, though, you get the impression this is a band secretly keen to break out of the straitjacket of meat-and-potatoes, four-square trad rock, and offer up a slightly more varied sound, in the pursuit of taking their career to that elusive next level.

You wouldn’t get Brian and Angus’s crew attempting bitter-sweet acoustic ballads like Strange Kinda Nothing, or the melancholy anthemics of Last Days of Summer and Gone Too Long. The flickers of arpeggio guitar in Whiplash offer a notable change in sonic texture, throwing touches of U2 into the equation.

But The Answer will always, at heart, be a band geared around heavy blues, thanks in no small part to Neeson’s impressively Coverdale-esque tonsils, which sound better than ever on sleazy, malevolent Crue-style rabble rousers like I Am What I Am and Red.

All told then, another solid effort from Ulster’s finest. Will it be enough to make the world sit up and take notice again? That remains to be seen./o:p